50th anniversary CD announcement, concert to commemorate the start of operation of ".kyoto"

The KCG Group will announce the 50th anniversary CD album "MUΣA" at the Satellite Large Hall in front of Kyoto Station, Kyoto Computer Gakuin University from 6:00 pm on October 10, 2014 (Friday), and the university will manage and operate it (registry). We will hold a concert to commemorate the start of operation of the geographical name top-level domain ".kyoto" (dot Kyoto).The main vocalist of the entertainment group "Cirque du Soleil" and a professor of the university Nitza Melas Will perform a song that he has made into "MUΣA".Admission is free.Why don't you enjoy Nizza's melody at the hall where the sound effects are evaluated as one of the best in western Japan and classical concerts are held frequently!

In addition, ".kyoto" is expected to start operation within this fiscal year, and we are currently introducing the Founders Program, which is a priority registration program for ".kyoto", to organizations and companies in Kyoto Prefecture.".Kyoto" aims to further improve the "Kyoto" brand as a domain that maintains high reliability with an emphasis on public interest and publicity for people who are related to Kyoto.In the future, in collaboration with Kyoto Prefecture, we will use it by many companies, schools, and individuals in the prefecture, including public institutions, and strive to contribute to the local community by revitalizing the industry of Kyoto Prefecture.

Sing "MUΣA" at this concert Nitza Melas In addition to being a vocalist, he is also active as a dubber for commercials and game characters.In charge of special classes for the IT voice actor course newly established in 2014 in the information processing department of KCG's C department (computer science department).I teach vocalization while introducing that IT is being used in my own activities.In addition to students from this course, students from other departments and KCGI also take classes to deepen their understanding of digital processing of sound through songs and dubbing of animation.

A singer-songwriter born in Montreal, Canada, who has fascinated audiences all over the world with his multilingual skills. Entertainment group "" that continues to perform circus and musicals in each country Cirque du Soleil One of the three main vocalists.The song that I wrote and composed was Cirque du Soleil She was the only singer in the show, and in fact, the top singer in the group.She does not belong to any record company label, and performs songs and songwriting and also does graphic design, promotion, and sales. Since 2013 she has been a professor at Kyoto Computer Gakuin and The Kyoto College of Graduate Studies for Informatics.

Nitza Melas, who is in charge of classes at KCG 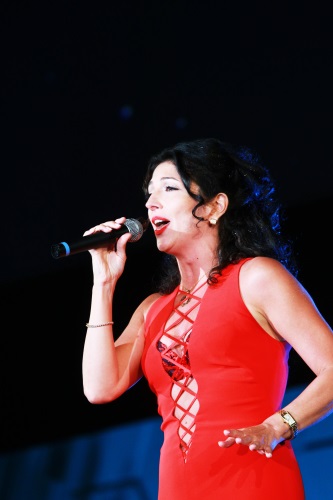 Nitza Melas Sang enthusiastically at the opening of the KCG 50th Anniversary and KCGI 10th Anniversary Ceremony and at the celebration live = June 1, 2013
END_OF_DOCUMENT_TOKEN_TO_BE_REPLACED