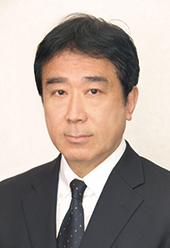 I'm often asked why I came to the world of computers even though I'm a veterinarian. I think it is very interesting that we can find common points between life, which is nonuniform and diverse, and computers that try to make things black and white with 0 or 1 when we try to understand their characteristics with thorough observations. When I was a student, I was working on interferon in my laboratory when I first used BASIC. The lab experiment was like looking for a grain of gold buried in a vast desert. However, in comparison, if I wrote a program on a computer, it always produced a clear, fast result, even when there is an error. It is very interesting in that respect, and I have a memory of getting absorbed into BASIC and other programming languages. In fact, I had clinical experience as a veterinarian, and I made every effort to treat animals, but I felt keenly helpless as a person toward animals that weakened and eventually died. I was deeply saddened and disappointed more than I had ever imagined. As far as life is concerned, you cannot just debug and run the program again like in the case of computers. After that, I changed my course and started working as a system engineer for a manufacturer. After experiencing the era of general-purpose machines, TSS, and client-server models, I started touching the Internet around 1995.At that time, I was the head of the Information Systems Office at Kyoto Computer Gakuin, and started the initial website of Kyoto Computer Gakuin. After that, I left school, went through a lot of projects of my own and worked as a grassroots networker and engineer. I have the fortune of renewing my connection, and came to teach at this graduate school, which is a part of the KCG group. I would like to share a lot of information and know-how with students, including my own countless experiences of making mistakes.

I believe that increasing the power of IT (ICT) will lead to an increase in Japan's national strength. Let's challenge ourselves to new things and create a fun IT (ICT) world together while feeling the pain and accomplishment of the project together.