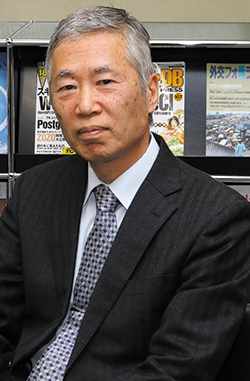 Professor Yoshitaka Kai developed a logistics system, as well as Japan’s first apparel MD system using AI, for Teijin Ltd., a leading Japanese textile manufacturer. Prof. Kai later moved to the Mitsubishi Trust and Banking Corporation (now Mitsubishi UFJ Trust and Banking Corporation), where he was responsible for the development and operation of an asset-management system. Drawing on his 28 years of experience in the business word, Prof. Kai provides guidance on management science, finance and fintech at KCGI.

Computer is now at the core of financial institutions.

A role in the beginning of fintech

-Please tell us about the relationship between IT and finance

At Mitsubishi Trust and Banking Corporation I ran the share management system, developed bond-option models and was involved in the securitization of home loans. In each case, we were the first ones in Japan to try these things. I guess you could say that was the start of fintech in Japan. At heart, the finance business is a world of numbers. Computers are the perfect fit for serious number crunching, so it is no exaggeration to say that the history of finance is the history of computerization. For a long time, the focus was on business efficiency and IT was the way to help. As time goes by, multiple banks specialized in retail banking have appeared, threatening the foundations of the traditional financial institutions. For a long time the news was full of stories about restructuring, including the dismissal of people who didn’t fit with the target of business streamlining, and the growing ranks of people changing jobs. That was when computer programming started to become a core part of the operations of financial institutions, along with sales and finance.

The ability to analyze, understand and at times design operations

-How is the role of the IT professional changing?

IT supports making business more efficient. That is true not only in finance but in many industries. At first, because IT plays a supporting role, it was thought that all the IT engineer needed to do was to assemble some computers and write programs according to the design drawings drafted by the people working on-site. But IT has advanced so fast that it now handles much more than mere calculation and memory. We now know IT can be used for things we once thought only humans could do, such as judgment and reasoning. It is grown to the point where IT can now take the place of humans in fields such as financing and investment. The advance in quantity has effected a change in quality. In effect, work-process design and IT implementation have become one. It’s no longer possible to draw a strict line between the two. This new reality changes the qualities required of an IT engineer. Rather than being passive and waiting for blueprints, we are now required to analyze and gain insight into our business, and in some cases design the business itself. Unlike the passive recipient of somebody else’s design drawings of days past, the IT engineer of today analyzes, understands and at times even designs work processes. . A new world is beginning for IT professionals, with dimensions never experienced before. We can expect new genres to emerge in the years to come, combining IT with marketing, with sales, with research and so on. Fintech, a neologism for the marriage of finance and IT, has now come into currency. I think many more will come.

The best part of learning is changing your view of life

- In such times, what sort of guidance do you offer students?

I once taught an MBA course. Why do people already in the working world join the program? Basically, there are three patterns. Some people want to increase their level of specialization in their existing field. Others want to add managerial skills to their existing skill sets as engineers, researchers and soon. The third pattern is people who want to change jobs or start their own company. Many of our students at KCGI came here immediately after graduating from university. It is a great opportunity to learn about IT and management at the same time, so I really want them to take advantage of this opportunity to challenge themselves in whatever they want to be. I encourage students who want to confront real issues, have a sharp awareness of those problems and want to improve themselves to come and join us at KCGI. They may even be able to found companies of their own. However, what is often seen in today's students is that they are good at gathering information and data, but they are not good at creating something new from scratch.In my approach to teaching, I try to help students to do five things: Make a clear choice about the themes they want to pursue in their lives; Aim not just to pass the courses but to be among the best in Japan in what they do; Master the arts of writing and communicating; Go back and forth between the real world and their models (abstract structures and parameters); and Maintain personal networks after they finish the course. Study shows us things we could not see before and makes other things look different. It changes our perspective on life and thus our way of living. That joy is something you can only experience at a university. Also, many of the people you study with become friends for life, free of ulterior motives. I want students to come to KCGI and find such friends and teachers for themselves. After graduation, students can continue with joint research. If students use their study to create large networks, I will be delighted. I said earlier that a new world is beginning for IT professionals, with dimensions never experienced before. I want you to lead that process. The travails of the pioneer are many, but your prospects are boundless At KCGI, I want you to acquire the spirit of the pioneer and the strength to overcome adversity.