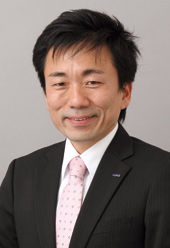 I was in my third year of junior high school and came to the United States to study. I graduated from high school in Boston. I majored in photography engineering at the School of Imaging Art and Science, Rochester Institute of Technology (RIT), and received a master's degree in printing engineering from that school. After returning to Japan, I made efforts to conclude a sister school agreement between RIT and KCG at the group school, Kyoto Computer Gakuin (KCG), and to establish a summer study program from KCG to RIT and a transfer program to the RIT Graduate School. My alma mater, RIT, is a prestigious university that trains engineers who can play an active role in the industry, based on American pragmatism education philosophy. RIT conducts mutual research and development with Kodak Company in Rochester, which is the best in the country in terms of photographic engineering. In the field of printing engineering, RIT is also in the top position in the United States. I became one of the founders of The Kyoto College of Graduate Studies for Informatics, with the goal of creating a school like the professional school that makes a significant contribution to American industry.

Since I have been studying in the United States for more than ten years, I have been able to observe and experience the differences between the cultures of Japan and the United States, as well as the differences in the views of life and the world between Japanese and Americans. This was an extremely valuable experience for me. In particular, since Japan is an island country, it tends to be preoccupied with stereotypes from one point of view. If the globalization of the world continues as it is today, it may become a biased view of the world and cause international friction. Having multiple perspectives is very important in order to generate new ideas in academic research and technology development.

Many international students are studying at this college because of its emphasis on globalization. There are no national boundaries in IT work. Please try to deepen your interaction with each other and make efforts to learn how to see things from multiple perspectives as well as cultivating an international sense and vision.