President and Professor, The Kyoto College of Graduate Studies for Informatics 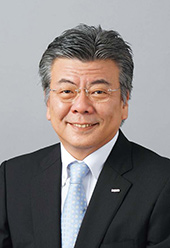 Education at The Kyoto College of Graduate Studies for Informatics

The Kyoto College of Graduate Studies for Informatics (KCGI) is the first IT professional graduate school in Japan.Its parent organization is Kyoto Computer Gakuin (KCG), the first private computer education institution in Japan.KCG was established as a private school by Shigeo Hasegawa and Yasuko Hasegawa under their unique, forward-looking philosophy. We have been providing computer education for more than 50 years since our founding in 1963, during which time not only high school graduates but also many graduates of four-year universities have entered and completed their studies.At the time of the school's founding, only research-oriented graduate schools existed in Japan. So many students, who entered after university, chose KCG as a result of searching for higher education institutions that were directly connected to practical work. Although KCG was under the special training college system, it also had a social role as an educational institution for university graduates, and has been functioning as a kind of graduate school of professional practice.

Based on this state of affairs and history, in 1998 KCG established a joint program with graduate programs (including Information Sciences and Technologies, Computer Science, and others) at the Rochester Institute of Technology in the United States and has since implemented a professional graduate school curriculum oriented towards practical learning. This collaboration between a Japanese vocational school and American graduate school programs was both the first of its kind in Japan and groundbreaking.

In one sense, it could be said that it was inevitable that we would embark on the establishment of an IT professional graduate school under the new Professional Graduate School system with staff from the Kyoto Computer Gakuin, which had made such achievements as those mentioned above, at its core. The Kyoto College of Graduate Studies for Informatics was established as Japan's first IT professional graduate school in April 2004, the first year of the new education system in Japan, with the endorsement and cooperation from the business sector, as well as many persons involved in education, including professors and researchers from the Rochester Institute of Technology and the Teachers College at Columbia University in the United States.

We also set forth the following as our founding philosophy: "Cultivate specialists in applied information technology who possess creativity and high level practical abilities which will meet the needs of society, support the present age, and lead us into the next generation." This program is based on a modified version of the Information Systems (IS) master's curriculum of the Association for Computing Machinery (ACM), the oldest and largest international association of computer-related societies, and is designed to train engineers, especially CIOs, specializing in web business (e-business).KCGI advocates as our mission and purpose the contribution to the realization of a high level information society and the Japan's economy through the provision of high level IT professionals who possess extensive knowledge and high level skills beyond what is conventional and who are also internationally minded in order to meet the need for high level and diverse human resources in our IT society, as well as the adaptation to developments in information and related technologies and the provision of education on theory and practical technology in academic fields related to science, technology, and business management in the training of high level professionals.

It is to this extent that major programs concerning web business (e-business) in Japan at the undergraduate and graduate school level were virtually non-existent and the subject was treated as merely a sub-field in traditional major programs such as business management, industrial engineering technology, and majors related to information. In other words, the subject was in fact merely researched and taught as part of a systematic and comprehensive major or as part of a major field.

As a professional graduate school of IT in the broad sense of the word, our university aims to be a "professional school" of global standard and focuses on fostering leadership skills.We are not a graduate school of information engineering or information mathematics as a "vertically divided field," as is the case in many other universities, but a graduate school of a different genre, although we have many things in common with them.In addition to the pedagogically based curriculum design and faculty composition, we have also introduced a Learner Oriented Instructional Design, an open horizontal division of labor system, and regular measurement of Learning Outcome. Such a way, we are working to enhance our educational system by taking in many elements and measures that were rarely seen in Japanese universities until then.

In addition, we focus on fostering international leaders by cultivating human resources with both IT skills and management skills who can demonstrate their abilities in Asia and other countries around the world.At KCGI, we have aimed to be the number one IT professional school in Asia since our establishment and we actively accept students from around the world and particular Asia.

In addition, against the backdrop of the recent international acclaim for Japanese content such as anime, the importance of the content industry is increasing. There is a huge amount of social needs in a wide variety of related fields.We are constantly reviewing and updating our curriculum so that students can acquire knowledge of IT in general, and in the future, be able to use it practically and be active in their chosen fields.Those who have completed the program with full knowledge, skills, and a broad perspective are active in a variety of fields in Japan and abroad.

KCGI established a satellite campus in Sapporo and another in Tokyo were established in October 2012. Connected to the main school in Kyoto via an e-learning system, this makes it possible for students to receive cutting-edge IT professional education while studying at either satellite campus in Sapporo and Tokyo. Students can attend lectures in real time and ask questions directly to the professor through the camera, or they can watch recorded lectures stored on the server at home.It is, so to speak, possible to go beyond the boundaries of space and time to receive a high-level professional education anywhere, anytime. In addition, KCGI is also endowed with a solid network connecting it with higher education institutions around the world, including in the United States, China, and South Korea. Through our repeated experiences in partnering and networking with these institutions, KCGI is further increasing its interaction with other countries and is actively developing education projects towards this end.

Amidst the hectic changes of the day, we are steadily advancing and pushing forward with the training of high-level IT professionals based on our founding philosophy and our established mission and purpose. I eagerly await the entrance of ambitious students such as yourself.