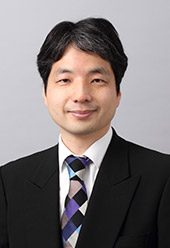 20 years ago, when I was enrolled in the International Information Processing Program at Kyoto Computer Gakuin, the Internet was just beginning to spread among the general public. I stayed in Boston, Massachusetts as part of the department curriculum and toured the MIT (Massachusetts Institute of Technology) lab to see a demo of Mosaic, the just-launched web browser. At that time, the Internet was centered on texts, but Mosaic displayed photographs and decorated texts. Shocked by the richness of the expression, I was convinced that society would change by Web technology. I wanted to create software like this, so I chose this as my graduation project theme and developed my own web browser. It took me several months just to get the minimum functionality working, and I remember that it was very difficult.After graduating from the program, I worked as a software engineer for 10 years, and in April 2004 I entered the newly established The Kyoto College of Graduate Studies for Informatics. The conviction I had when I saw Mosaic at MIT came true, and over the next 10 years, new businesses have emerged one after another using the Internet, and in order to be active in the information society of the future, I thought it necessary to have knowledge of business as well as knowledge of information technology.

After graduating from The Kyoto College of Graduate Studies for Informatics, I continued to work as a software engineer, but my participation in the Language Grid Project, which tackles language barriers in an internationalized society using a service computing approach, strengthened my desire to not only use technology, but also to create necessary technology. I gradually became more and more research-oriented.In April 2014, I moved to the Graduate School of Informatics, Kyoto University, as a research fellow. In September 2017, I received my Ph.D. from that school. The IT industry is moving so fast that the technology we saw in the university labs will be commonly used in the public in the next few years. The development of programming technology is also progressing at a dizzying pace. A web browser that took months to develop 20 years ago can now be realized with a dozen or so lines of programming, and the recently talked about artificial intelligence, for example, can be built in a day to analyze objects in a photograph.

To flourish in such a fast-paced industry, it is necessary to acquire a broad perspective as well as a deep understanding of IT, and the curriculum at KCGI is designed to do just that.You will learn how to understand the latest technologies and how to use them, and at the same time you will learn how to create business plans to bring innovation to society. I hope you will spend two exciting and fulfilling years at this university and step up as a person who will create the future.

No review by domestic academic societies