This month's topic is railways. October 14 has been established as Railway Day in commemoration of the opening of Japan’s first railway, which connected Tokyo (Shinbashi) and Yokohama (Sakuragicho Station) on October 14, 1872.

Until then, traveling between Tokyo and Yokohama took a whole day on foot. The trip was shortened to one hour or so, and so was the speed of information transmission.Prior to the telephone service which started in 1890, the railway network covering the whole nation played a major role in the field of communication.

On the other hand, the first electric train was run by the Kyoto Electric Railway (later Kyoto Tram) opened in Kyoto in 1895. From the Taisho period to the early Showa period, the private railway network developed mainly in metropolitan areas.As the lifestyle of commuting from suburban homes by train was established in the metropolitan areas of Japan, the connection between the railway and the Japanese people grew.

Let's now focus on the topic of the trains.Modern trains are equipped with a liquid crystal display in the cars, so that not only information can be quickly provided about each stopping stations but also information on accidents.Of course, there is also a simple breaking news service.

Finally, I would like to talk about railway control.Railway control consists of vehicle motor control and advanced signal systems, and more than half of the Shinkansen operation is automated.Autonomous subway systems are also available in some cities.In this way, it has become possible to control railways by the power of computers.

The current railway is a treasure trove of information and communication technology. 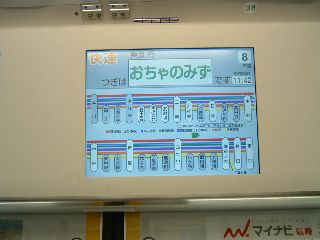 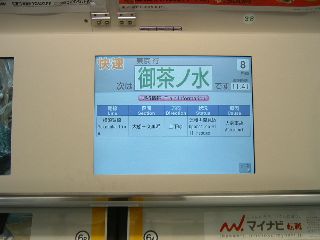 Inside the JR East train.Accident information