July 2009 The great eclipse of the century

The total solar eclipse on July 22 is approaching.The total solar eclipse last seen in our country was 46 years ago. And, very few people could see it since it took place in the early morning in the Shiretoko Peninsula.The next total solar eclipse will be 26 years from now. The great opportunity of this year drives many astronomical researchers and armature enthusiasts to Shanghai, the Tokara Islands and Amami Oshima Island.It is the first time for the Kinki region to observe 80% eclipse since the annular eclipse in 1958.

The total eclipse of the sun, the very symbol of blessing vanished in the middle of the day, evoked astonishment and fear of threat to the ancient people.In the ancient Orient, the media and Lydia stopped fighting because of the sudden eclipse of the sun during the battle.In Xia Dynasty of ancient China (its existence has not yet been confirmed, but probably around the 20th-19th century BC)the astronomers named Mr. Xi and Mr. He, who skipped the solar eclipse forecast, were fired (received the death penalty instead of dismissal).Astronomers back then had to calculate and forecast the eclipse at the risk of their lives, so they couldn't afford to enjoy the starry sky.

It was an astrologer of Babylonia (aka Caldia) from the 7th to 6th centuries BC that discovered the solar eclipse cycle.Its cycle is approximately 6585 and 1/3 day (about 18 years 10 days 8 hours), and today it is called the Saros cycle.Because the sun, the earth, and the moon are positioned relatively in alignment for each Saros cycle, a solar eclipse or lunar eclipse occurs under almost the same conditions at the end of each Saros.However, because it is a fraction of 1/3 day, it moves to a point on the earth where the time difference is 1/3 day (120 degrees longitude).And after 3 salos (54 years and 1 month), it can be seen at almost the same point again.How did the ancient Babylonian astrologers know such things?The origin of the constellations was Babylonia, and their astronomy was transmitted to Greece, India and the whole world.

If it rains on July 22 and you can't see the solar eclipse, what's your next chance?・ ・ ・The May 21, 12 annular eclipse can be viewed in less than 2 minutes across western Japan (Around 7:30 in Kyoto).The next total solar eclipse seen in Japan will take place on September 2, 2035 in the area crossing the northern Kanto region from the Noto Peninsula, and around 10:00 am.. You can go there on a day trip from Kinki.Ninety percent eclipse will be seen in almost all regions of the country.The next total eclipse occurs on August 24, 2063, and the total eclipse zone is in northern Aomori and southern Hokkaido across the Tsugaru Strait, and about 80% will be missing in Kinki.There will be no total solar eclipse in Kyoto this century.

Of the eclipses over the past 2000 years, Kyoto had numerous 90% or more partial, but there have been only 5 total eclipses.Of these, the first two (158 and 522) were not recorded, and the fourth (1742) and the fifth (1852) were during the Edo period.The third time was the Heian period, and in the history book “Nihon Kiryaku”, it was written as “Guncho Hirai, Shusei Jinken” on July 1st of Ten-en (= August 10, 975). People in the capital must have been surprised to see birds flying in groups and seeing many stars.At that time, Seimei Abe was working as Tenmon hakase, so this sentence must have been written in his department.An Onmyoji was not a mysterious fortune-teller or psychic, but a specialist who properly observes and records astronomical phenomena.The first solar eclipse record in Japan is that of March 2, 36th year of Suiko (= April 10, 628) in “Nippon Shoki”, but there is a debate over whether this was true or not.

You don't have to go to a southern island since 80% eclipse can be enjoyed in Kinki, so I hope as many people as possible see it somehow, even by sunbeam observation and live eclipse on the Internet.However, never look directly at the eclipse with a naked eye. You will need to use eclipse glasses.In Kyoto, the sun begins to be covered at 9:47, the eclipse reaches its maximum at 11: 5 and continues until 12:25.Anyway, let's hope for a sunny day on that date. 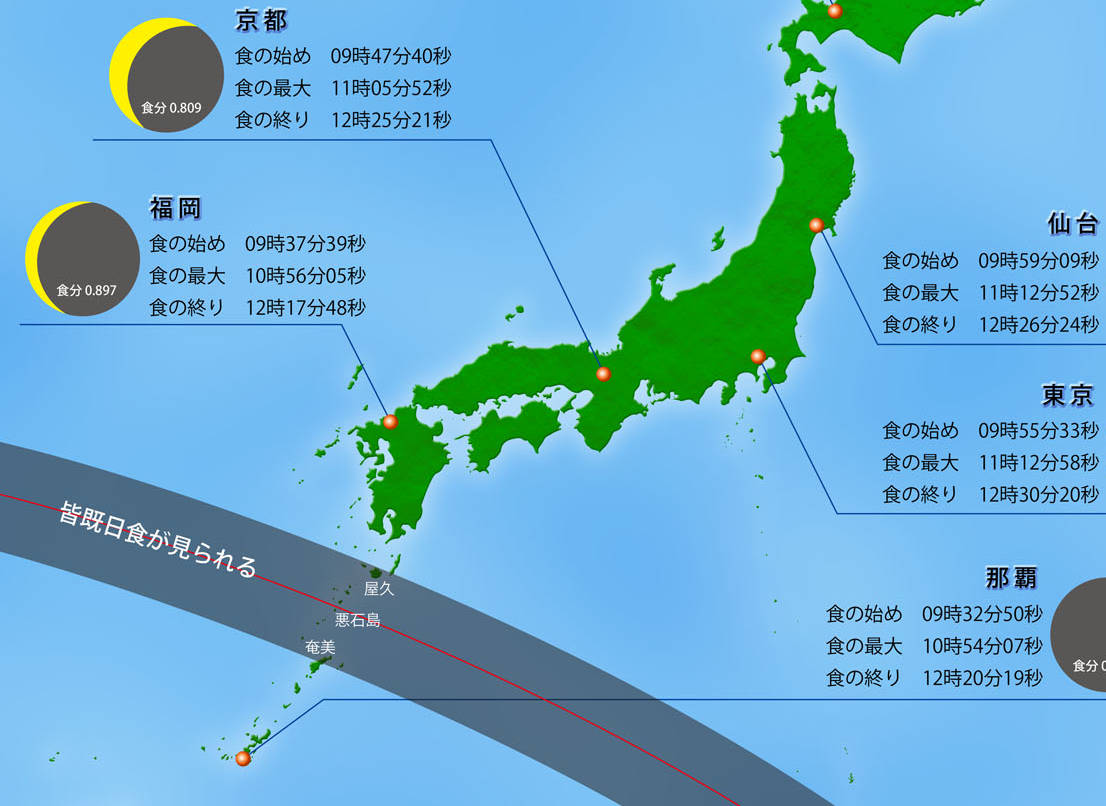