The other day, the asteroid (8579) was named Hieizan.About 160,000 asteroids are currently registered. While many of them revolve between Mars and Jupiter they widely spread throughout the solar system.The asteroid (8579) was discovered in December 1996 by Takao Kobayashi, a dedicated amateur astronomer in Gunma Prefecture.The asteroids that have been named after Kyoto are (4352) Kyoto, (5240) Kwasan = Kwasan Observatory, (572) Nijo = Nijo Castle, (10143) Kamogawa = Kamo River.The name of the asteroid is given by the discoverer applying to the Asteroid Center of the International Astronomical Union, so Mr. Kobayashi was asked to name it Hieizan with the desire to register Hieizan in the universe.The distance from the sun is about 300 million km, the revolution period is about 4 years, and the size is unknown, but it is probably about 10 km.

Needless to say, Hiei is a beautiful mountain located in the northeast of Kyoto and west of Lake Biwa.From the highest peak at an altitude of 848m, you can see both Kyoto and Lake Biwa, and it is a paradise for wild birds and wild monkeys.It is also registered as a UNESCO World Heritage Site.Enryaku-ji Temple, located on the mountaintop, was founded by Saicho in 782 (788), and flourished as a place of national defense to protect the Kimon (northeast) of Heian-kyo capital.Sakamoto (Otsu City) at the eastern foot of the mountain prospered as the temple town for Enryaku-ji. This is the head temple of the Tendai sect, but also includes Zen and Nenbutsu elements. It has served as a general university of Buddhism, where Honen, Shinran, Dogen, and Nichiren studied in their youth.It was burned down by Yoshinori Ashikaga (1435), and then by Nobunaga Oda (1571). The current buildings were rebuilt in the Edo period.Hiei has many national treasures and important cultural properties, and has appeared in many literatures and artworks, playing a major role not only in Buddhism but also in Japanese historical culture.

Mt. Hiei can be seen from anywhere in Kyoto, but if you try to take a picture, it will be very difficult to capture because apartments, construction equipment, etc would obstruct the view for sure.I wished to take a picture of the thirty-six peaks of Higashiyama, but settled with the view of Mt Hiei on the direct East from Takaragaike, Sakyo-ku area.The superimposed orbital map shows the arrangement of Mercury, Venus, Earth, Mars, Hieizan, Jupiter, and Saturn as of June 10, 2007, centered on the sun. 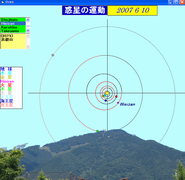 By the way, 8 planets and 160,000 asteroids from Mercury to Neptune are all revolving on a slightly flat ellipse counterclockwise.The period of revolution depends only on the distance from the sun, and the position of a certain period can be accurately predicted.What laws do these celestial bodies move according to? About 400 years ago, Kepler discovered a certain regularity by carefully arranging a huge amount of observation data.Today it is called "Kepler's Law".After that, it was formulated as a differential equation including gravitational force by Newton, and it was proven that position and motion of any date and time could be predicted by solving it.Planetary movements could be explained without supernatural power.The method of formulating the laws, drawn by collecting and analyzing data, and predicting the state of the future originated in the research of planetary motion. This method was eventually widely applied to natural phenomena, and now lays the foundation for today's science and technology oriented civilization. The basis for "Understanding Astronomical Movements is the Beginning of Modern Science" are these historical facts.I sometimes hear that social phenomena are not as simple as natural phenomena, but I never agree with that.I hope that someday in the future, a day will come that both life and social phenomena will be explained with surprisingly simple rules.We live in an era where we can use tools that are far superior to the great astronomers of the past.