Road congestion forecasts are made public during the Golden Week holidays and are used as a kind of yardstick in recreational planning, whether or not they are considered as reliable as the local weather forecasts.Naturally, this forecast is statistically processed based on various past data, and is it generally accepted that it is a little better than the accuracy of economic forecast.In addition, online traffic information for vehicles can automatically read the license plate number of the vehicle, so that it can accurately capture the driving conditions of individual vehicles and provide accurate prediction and signal control.However, for example, if we try to provide a recommended by road route for a vehicle, we need to solve unsolved yet interesting problems such as complex modeling, decision process, setting appropriate evaluation criteria, and even reading psychological status from the driving conditions of the vehicle.If you think about it, this is in the same category as modeling, measuring, and optimization in business strategy decision making, which utilizes data such as building customer models, using customer information, and watching market trends. We expect the younger generations to tackle such challenges with their flexible minds.

By the way, apart from traffic information system using IT, there has been a traffic system for a long time that does not have traffic lights, let alone IT, and it is functioning effectively to some extent.I think that those who drove in Europe have experienced this: it is called the “roundabout” method.This is especially common in the UK, but it is also common in other countries.I will use the example of the United Kingdom where cars travel on the left side of the road, but in other countries, if you reverse the direction of rotation, this example appliesIn this method, the route is changed via a roundabout than a regular four corner intersection.These are the basic rules. When entering the ring, one enters to the right side and if there are no cars on the right side, the car moves in a clockwise direction (Figure 1). If there is another car on the right side, then the car enters after the other car passes. (Figure 2). It is easy to understand if you consider it as absolute priority by the cars in the right.As long as all cars follow this rule, there is no danger, and in fact most cars (it appears more than 99 percent of the time) follow this rule and are not in danger. The traffic flow is smooth and cars can proceed without stopping unless there is a car in the circle (the part visible to the right).At the same time, they will naturally slow down to check, and safety checks will be enforced.All cars at the intersection are in left turn mode, so it is easy and safe.When going straight or 270 ° direction (corresponding to a right turn), if there are more than two lanes in the circle, the driver should take the right lane (from the center) route and change the lane to the left side to the outermost left shortly before exiting the intersection.There is no problem as long as all cars keep in mind the principle of giving priority to right hand traffic.In addition, when driving on an unfamiliar route, the driver can check the destination display on the road by going around the loop many times, and when he/she has done so, he/she can turn left in the direction of the route.If you go out on the wrong route, you can turn 180° (U-turn) at the next roundabout and you will come out again without any trouble.It may be a little confusing at first, but if you become familiar with this system, you can drive comfortably without unnecessary waiting for traffic lights. 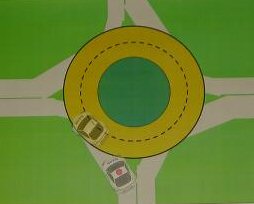 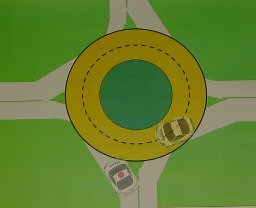 Roundabouts can vary in size, but they can be really small circles (the inner white line has a radius of around 1m).There are ones in which cars can run over the circle and they do not appear any different from ordinary intersections. Others could be over tens of meters, and roundabout ladders (two or more) also exist.If there is not much traffic (and the driver complies with the basic car movement), I feel that this is an ideal intersection system.There is a case that a signal is installed even though it has a roundabout shape where the traffic volume is very large.Figure 3 shows a large roundabout in the city of Lisbon (Portugal). The car is on the right and the direction is counterclockwise.There is a pedestrian crossing, so a signal is installed in that area. 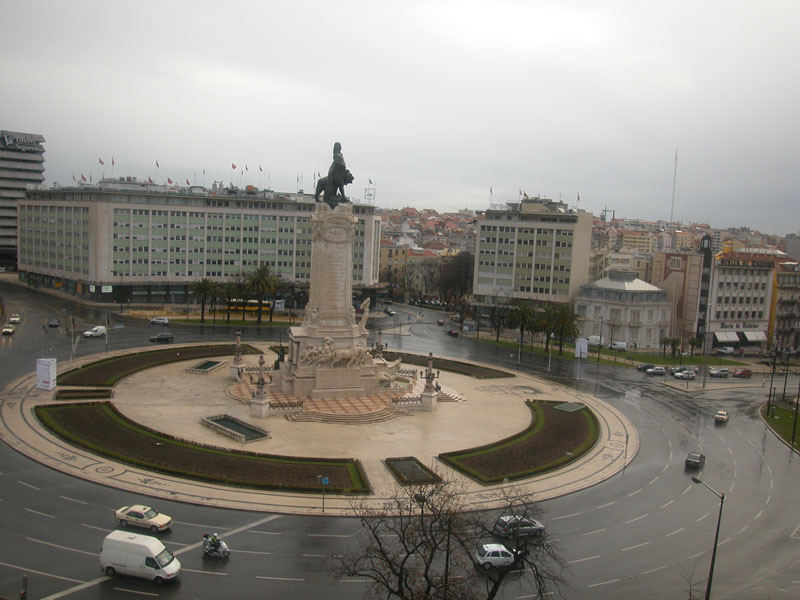 So even if the basics are simple, it works well as a system if people have the mindset to observe the law.A variety of social problems in recent years would hardly occur if every person makes it his/her fundamental rule to obey the laws and regulation with the understanding of their basis.

In many European countries, including the UK, observation of the rules are given (the rules themselves are rational and logical). For example, nobody tries to enter the opposite lane when visibility is low.(However, since it is not 100% guaranteed because of foreign drivers.)You do not see trucks which keep driving in the passing lane, either.You can enjoy safe and comfortable driving.

One time, on a suburban road in Ireland, when the driver increased speed to pass a truck and was about to enter the passing lane, the truck turned right with the right signal, blocking our path.There was no obstacle on the left.At that time, I wondered why, and the reason became clear shortly after.I couldn't see at all, but a car was coming into the road from the narrow road ahead by turning right.The truck showed us the situation ahead (there is a danger of an accident if you keep driving) with his action.Soon after that, when I passed the truck, I raised my hand and the driver winked back.

I was impressed and admired the professional manner of the driver who had the ability and integrity to mind the safety for all in such a situation.A specialist in any field should be able to act with such spirit of generosity bolstered with professionalism and a sense of justice.