May 2008 Trip to Hokkaido and miscellaneous impressions on Ainu people

About 4 years ago, I retired from a company that I worked at for many years.My official retirement was decided at the general meeting of shareholders at the end of June.People in my position usually stay as an advisor, but in my case, I had decided to work at the Kyoto College of Graduate Studies for Informatics in October, so I had an unusual arrangement.I stayed at the former company in the position of the adviser (without pay) for 1 year, because of the following two reasons: it allowed me to maintain the close relation with the business world, which is one of the characteristics of IT professional graduate school. Also, it secured my connections to obtain the latest information of the business world.

Thanks to this arrangement, we were able to obtain the current information from the IT industry.I am very grateful for this consideration.Of course, I had to comply with the non-disclosure agreement which I signed at the time of retirement, it was still very useful to teach students with the actual business materials.

When we leave the company and move to academic settings, the cutting edge information stops coming in right away, and we tend to lose the contact with the real business world.After that, I was also able to serve as a board member of a software company, which keeps me stay tuned with what the industry is looking for. I take advantage of this as a professor of an IT professional graduate school.

Returning to the beginning, I had a three-month preparation period after retirement, so I decided to slowly go on a trip to Hokkaido with my wife during that period.I chose a relaxing plan for Seniors and joined the tour.

At the end, it was a luxurious trip with a small group of only three couples.We went by plane and arrived at Chitose airport. Since it was in Hokkaido, the rest of the trip was a bus tour.It was luxurious in the sense that the total of nine, three elderly couples and their tour crew, bus driver and bus guide, traveled on a large bus for 8 days. 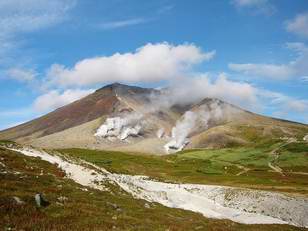 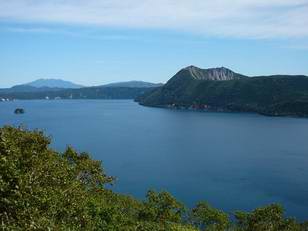 Hokkaido is a land with a sad history.You may not notice by just looking at tourist attractions, but Hokkaido is originally Ainu land.Beginning with the policy of the shogunate during the Edo period, the Ainu people have been continued to be exploited even after the start of the Meiji Era.They followed the same fate as the Native American.

There are many places in Hokkaido that are named by Ainu people.The tragic history of Ainu is still repeated in all parts of the world.From now on, I will take time to deepen my knowledge about the Ainu people.

During the tour, there was a shop where the Ainu descendants sold woodcarving souvenirs for the tourists.I bought a wood carving of "Chisetrokamui" among various wood carving figurines. 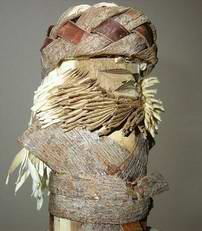 “Chisetrokamuy” is simply “the guardian deity of the house”.The Ainu gods are close to the “spirits” that we think of and is based on the idea that has been cherished in their unique culture.Therefore, various “Kamui” existed, and the Ainu people lived while valuing “Kamui” in their daily lives.

The “Chisetrokamui” I bought is sitting on my lab desk and protecting me.Looking at the rustic doll makes me feel at ease.

The Ainu people culture is one living with nature that is far removed from modern material civilization.For example, they only caught the salmon going up the river as much as the amount they needed to eat that day.As preservative food, dried salmon was made. But, they only used the salmon which laid eggs and already used up energy and fat in order to leave offspring.Deer was also an important food.In the same way, hunting was far from excessive.

Though I do not intend to question the propriety of the way of life of the Ainu people, there have been many serious problems recently, such as the ideal way of the present developing countries, material civilization which is close to the waste of our developed countries, serious environmental problems, energy problems, ethnic conflicts, economic globalization, and extreme dichotomization of the rich and poor in each country.

We have an obligation to leave an environment in which our offspring can live forever.I feel that it is important for each person to think and act, instead of leaving that effort to someone else.