April 2009 Solving the Monty Hall problem with a decision tree

There is a famous problem called the Monty Hall problem.Another name for this problem is the “Monty Hall Dilemma”.The problem is derived from an offshoot of a segment featuring the American quiz show hosted by Monty Hall.

Why did it become famous?

After the solution to this problem was discussed in Marilyn vos Savant's "Ask Marilyn" question and answer column in "Parade magazine" in 1990, about 10,000 readers, including several hundred mathematics professors, responded that her answer was wrong (despite the fact that she was actually correct). (Source: http://ja.wikipedia.org/wiki/ Monty Hall Problem )

Here, I would like to explain this problem using the decision tree instead of the usual methods such as common mathematics, probability theory and Bayesian theorem etc. I present the business tree during my lecture on decision making mechanism in “Advanced Topics in Business Administration” course at KCGI,

After the player makes their first choice, the host, Monty Hall, opens one of the other two doors and shows the goat.The host then gives the player the option to either keep their original selection or change it to for another closed door.Should players change their choice and choose the other door?(Source: http://ja.wikipedia.org/wiki/ Monty Hall Problem )

We look at this problem not as a "probability" but as "expected value".

From the above assumptions, the following decision tree can be drawn. 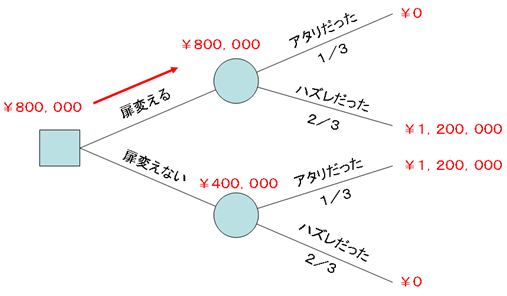 This time, the decision node is:

1. Which door to choose
2. Whether or not to change the door
Here, we treat all the doors "equally" and represent the "probability to win" of the selected door as a probability node.

And use one kind of decision node (whether to change the door?)and one type of probability node (does the first choice win?)to draw a decision tree.

This is how we think about the gain.

Once you have drawn the tree, consider from the right to left.

Therefore, the answer to the Monty Hall problem, is that “You should change the door.” This is the right decision.

In this way, when faced with a situation that is difficult to understand intuitively or makes a wrong decision, decision support tools such as decision trees can be used to make better choices.
This is one reason why we study Business Administration.