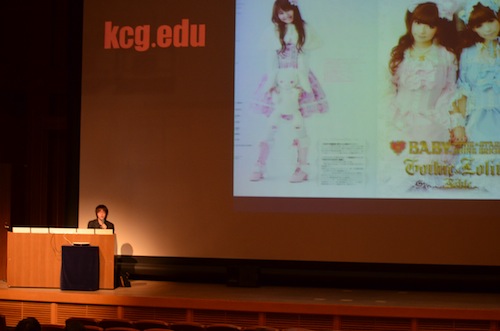 Mr. Nakamura talks about the transition of Japanese industry, the fashion industry, and other topics under the title of "Cool Japan and the Content Industry.

“Cool Japan and Content Industry”, the second of the 3rd series of “Content Industry Special” in The Kyoto College of Graduate Studies for Informatics (KCGI), will be held on December 15th at the The Kyoto College of Graduate Studies for Informatics Kyoto Station Front Satellite Hall did.Mr. Hitoshi Nakamura, KCGI lecturer and specially-appointed lecturer at the University of Tokyo, emphasized the need to promote creative industries such as fashion as the direction Japan should take.Many members of the public and students came to listen.

Nakamura began by discussing postwar Japanese industry.
▪ Time to find a way to make things in the absence of foreign capital, resources, and materials
▪ Beginning of high-growth period due to special demand for the Korean War
Concentrated investment in infrastructure and key industries such as electricity, shipping, coal, and steel
▪ Establishment of Cool Japan strategy to earn foreign currency due to the end of the high-growth period
The transition was traced to such things asHe emphasized that the image of Japanese culture from overseas has shifted from "samurai, Fujiyama, and geisha" to "anime, manga, and games," and that "Japanese industries" created by the new "Japanese culture," including fashion, are attracting attention.He also showed data showing that many tourists to Japan visit commercial facilities such as department stores and electronics stores, rather than general tourist attractions. "The convoy protectionist administration born during the high-growth period still remains in the fields of oil, natural gas, electricity, and nuclear power, but in the future, the Cool Japan Strategy will focus on creative industries such as manga, animation, and fashion, which are not related to the convoy system, as they will earn foreign currencies and support Japan," he said.
This was followed by a "coffee hour" during which Mr. Nakamura and the participants enjoyed chatting over a cup of coffee, followed by a lecture on the Japanese fashion industry.

The general public lecture "Advanced Contents Industry" is offered three times on Saturdays.The program introduces Japan's unique culture with a focus on doujin activities in anime, games, fashion, etc., and examines the content of these activities, their market, and their impact on society.Admission is 3,000 yen per session for the general public and free for students.

The last lecture will be on Saturday, January 12, 11: 30-18: 20 (lunch break 12: 40-13: 30) with the title “Manga Games and Doujin Activities”. Tokyo Institute of Technology Specially Appointed Lecturer, The Kyoto College of Graduate Studies for Informatics Lecturer)

Mr. Nakamura talks about the transition of Japanese industry, the fashion industry, and other topics under the title of "Cool Japan and the Content Industry.

Mr. Nakamura and participants enjoyed chatting during the "Coffee Hour" around the coffee table.
END_OF_DOCUMENT_TOKEN_TO_BE_REPLACED