"To the 'pointy' SEs".Lecture by Mr. Mori of Industry-Academia Collaboration and Furuno Electric 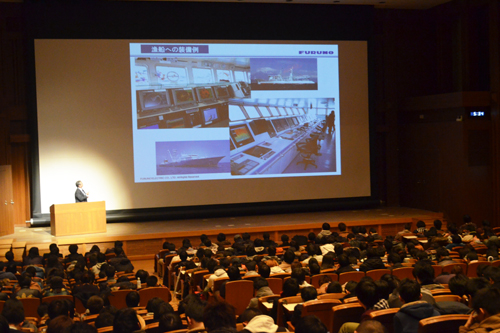 Academic lecture by Mr. Mori of Furuno Electric, the first activity after the industry-academia collaboration with the KCG Group: "Current Status and Future of Maritime IT.

KCG Group = The Kyoto College of Graduate Studies for Informatics (KCGI) / Kyoto Computer Gakuin (KCG) = Furuno Electric Co., Ltd. (Head office: 9-52 Hagiwaramachi, Nishinomiya City, Hyogo Prefecture, Yukio Furuno, listed on the first section of the Tokyo Stock Exchange) has signed an agreement between industry and academia. An academic lecture by the director in charge, “Current Status and Future of Maritime IT,” was held on 30th January at The Kyoto College of Graduate Studies for Informatics, Kyoto University Hall, where students and faculty members attended.Mr. Mori introduced the history of Furuno Electric, which was the first company in the world to successfully commercialize a fish finder in 1948 and now boasts the world's top share in the marine electronics field, and told the students, "The industry is looking for a 'pointy' SE.He encouraged the students to study hard so that they can become human resources with superior skills, the ability to find and solve problems, and the skills to correctly communicate and express their skills.

Mr. Mori began his introduction of Furuno Electric by emphasizing, "We are developing our business under the vision of 'realizing a safe, secure, and environmentally friendly society and navigation.Following the development of fish finders, the company has developed radios for fishing, radar for ships, and GPS navigation systems, and currently holds the top share of the world market for marine electronic equipment, with 16% for merchant ships, 9% for pleasure boats, and 44% for the fishing industry, according to the company.He also showed that the company is expanding its business globally, with 9 domestic subsidiaries, 25 overseas subsidiaries, and sales offices in 84 countries.

On the technical side, he explained the mechanisms of fishfinders and sonar, radar, GPS, and satellite communication devices, as well as the products he has developed.As a behind-the-scenes story, he mentioned the development of the weather radar and said, "The company's engineer in charge of the radar lives in Kobe City.In 2008, Kobe was hit by a torrential downpour, and many people, including children, were swept away by the muddy waters.This engineer, determined not to repeat the same mistake, became passionate about developing a weather radar that could predict sudden changes in weather conditions," he said.He also introduced the company's efforts in environmental, temperature/humidity, vibration/shock, and waterproofing tests in product manufacturing, and showed a video of the actual tests. 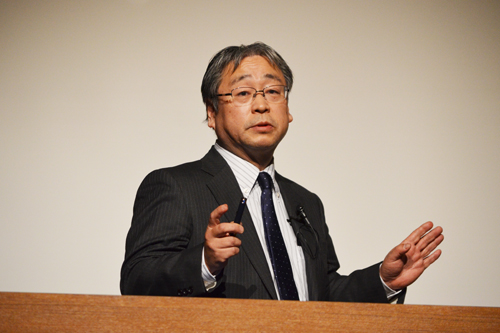