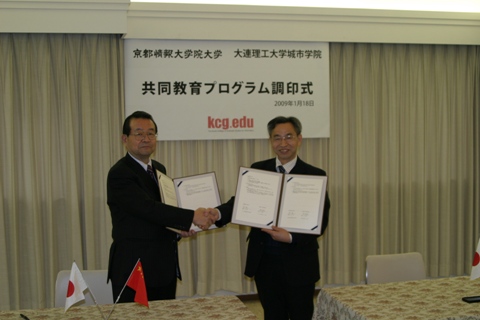 On January 18, 2009, KCGI and City Institute of Dalian University of Technology in China signed an agreement on joint educational programs.In the future, we plan to accept students from the City College of Dalian University of Technology and train them as highly-skilled professionals who are proficient in Japanese and IT.
The signing ceremony was held at KCGI Kyoto Ekimae Satellite on the same day.President Kuang Guo-zhu of City Institute of Dalian University of Technology and four others attended the ceremony, where President Kuang and Professor Yoichi Terashita, Vice President of Kyoto University of Information Science and Technology, signed the "Agreement on Joint Educational Programs".
Prior to the signing, Professor Wataru Hasegawa, Executive Director of Kyoto University of Information Technology, and President Tadasu Tadasu discussed the need for human resource development to support the IT industry in Japan and China, and confirmed that both schools will promote the development of advanced IT human resources to support the future IT industry in Japan and China.

It was jointly established by Dalian University of Technology and Dalian Songyuan Enterprise Group in 2003, and is the first independent state-owned and privately operated main university in the Northeast, authorized by the Ministry of Education of the People's Republic of China.The university will consist of 55 majors in five faculties: Electronics and Computer Engineering, Management, Architecture and Engineering, Foreign Languages, and Arts and Media, in accordance with the actual demands of social development.As of FY 2008, there are approximately 8,400 students.