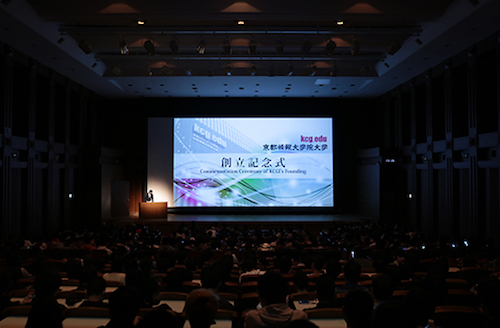 The Kyoto College of Graduate Studies for Informatics (KCGI) celebrates its 15th anniversary on November 1, 2018.Prior to this, on October 26, a commemorative ceremony was held in the main hall of the KCGI Kyoto Station Satellite, where students and faculty members celebrated and pledged to continue to grow.KCGI President Toshihide Ibaraki said in his address, "In recent years, the number of students enrolling in KCGI from all over the world, including Asia, has been increasing, and KCGI is building its position as a global graduate school.In the future, we will further promote the development of education in Japan and abroad," he said, describing the current status of KCGI, which continues to grow steadily.

KCGI Associate Professor Takao Nakaguchi then gave a commemorative lecture titled "25 years with kcg.edu.kcg.edu is the emblem of the KCG Group, including KCGI and Kyoto Computer Gakuin (KCG).Associate Professor Nakaguchi graduated from KCG and entered KCGI as a working student when it opened in 2004.After completing KCGI in 2006, he worked at NTT Advanced Technology Corporation before moving to a research fellowship at the Graduate School of Informatics, Kyoto University in 2014.I wrote my doctoral dissertation "Research on Distributed Service Infrastructure for Multilingual Communication" at Kyoto University and received my doctoral degree (Informatics) in September 2017.Associate Professor Nakaguchi is the first KCG graduate and KCGI alumnus to receive a doctorate from Kyoto University.

In his speech, Associate Professor Nakaguchi reflected on his life and talked about how quickly IT has advanced and changed society, how he was helped by his experiences and connections at KCG Group in order to respond to these changes as an engineer and researcher, and introduced the "Future Environment Lab" (jointly established by KCG Group and Nihon Unisys), an initiative to connect this trend to the next generation.Associate Professor Nakaguchi then called on the students to "continue to challenge the teachers at kcg.edu, acquire advanced skills, and become people who can make a difference in society.

KCGI opened as Japan's first IT professional graduate school, inheriting the pioneering spirit of KCG, the first computer education institution in Japan, founded on May 1, 1963.The Graduate School of Applied Information Technology offers a major in Web Business Technology, and upon completion, students are awarded a Master of Information Technology (Professional), the highest degree in the field of IT applications.In the academic field, the curriculum has been substantially reorganized since the 2018 academic year.Concentration models include ERP, Business Data Analytics, IT Entrepreneurship, Web System Development, Network Management, IT Manga/Animation, Tourism IT, and General IT, while industry models include FinTech, Agriculture, Marine, Medical/Healthcare, Content Marketing, and Education.The admission capacity has been increased from 80 students when the school first opened (total capacity of 160) to 360 students in FY2018 (600 students in FY2018 and 720 students in FY2019 and thereafter).We have been sending talented people with knowledge and skills in IT and management, as well as content, to the IT industry in Japan, Asia, and the rest of the world. 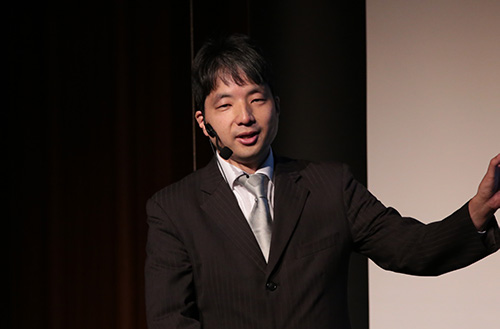