A splendid MU Σ A live show utilizing IT was held. 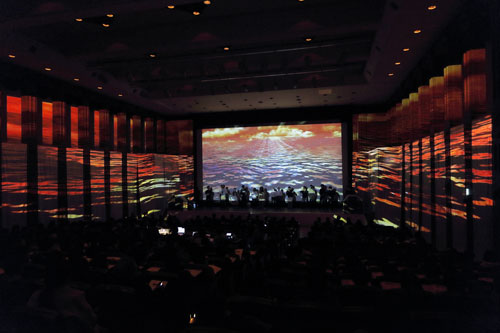 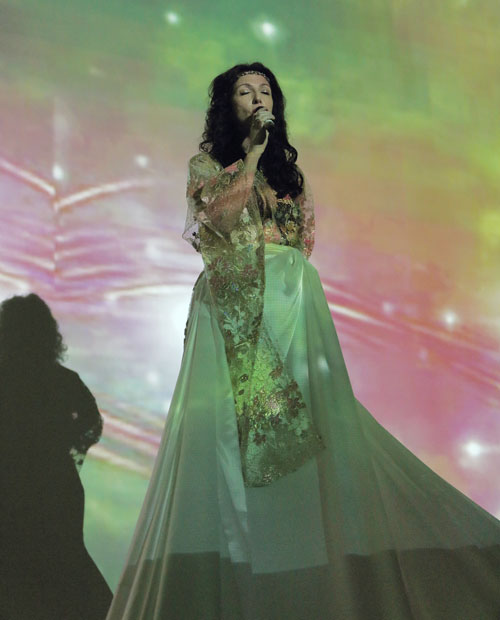 Nitza Melas, a professor at The Kyoto College of Graduate Studies for Informatics (KCGI) and active as the main vocalist of the international entertainment group “Cirque de Soleil”, is a visual artist active in Hollywood, Kirill Kosik. The MUΣA Live Show, which was designed for visual effects and was attended by many students from KCGI and Kyoto Computer Gakuin (KCG), was held on January 22 at the Kyoto University Information University Kyoto Station Satellite Hall. People enjoyed a 30-minute song and dance show with plenty of brilliant visual effects.

This show was planned as the culmination of the intensive "Performing Arts IT" course offered at KCGI last year and the "Performing Arts Seminar" offered at KCG. Students from both schools put all the acting and vocal skills and CG production knowledge they had learned in class to work on the show.Preparation work began in earnest only a week before the performance, with many rehearsals held under the guidance of Ms. Nizza.Members of KCG's dance and chorus clubs also participated in the event, performing their youthful, energetic dances and singing voices.

The best part of the show is the collaboration of the stage performance and the CG images projected on the three walls of the hall.The CG images of fire, water, snow, moon, etc., created by Mr. Kirill and the students of KCG Kamogawa were projected from three projectors onto the screen in front of the hall as well as onto the walls on either side covered with a white cloth, creating a three-dimensional visual space surrounding the audience in time with the performers' singing and dancing.Flames were projected in time with the hand movements of a shaman played by a student, and a shadow puppet dance performed by the dance circle's faculty advisor created a fantastic show in which a giant moon moved slowly across the sky and Ms. Nitza sang solo against a backdrop of endless dancing snowflakes.

This "Performing Arts IT" course is a practical class that trains students to become proficient in IT-based stage direction under the guidance of Mr. Nizza and Mr. Kirill, who are at the forefront of the North American entertainment industry.Students will not only learn the individual skills that make up a show, but they will also have the opportunity to participate in the planning and staging of a MUΣA live show, providing them with a comprehensive learning experience in which they can apply the knowledge and skills they have learned on the job. 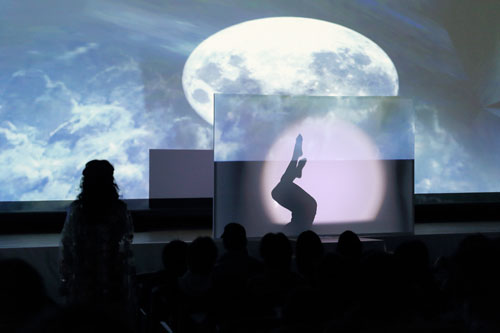 Shadow Dance under the Fantastic Moon 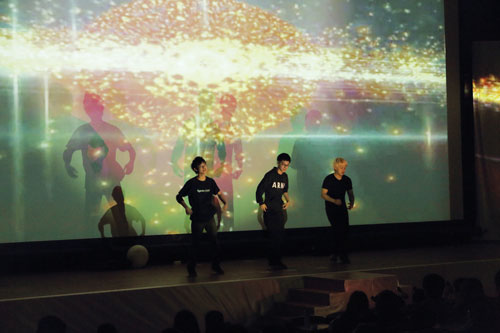 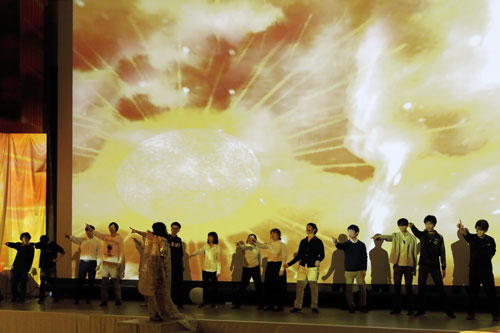