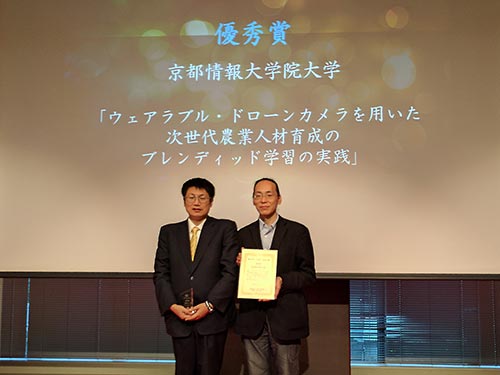 Dr. Keiji Emi and Dr. Shinzo Kobayashi of KCGI with the certificate of commendation

A joint research project by Associate Professor Keiji Emi of the Kyoto Computer Graphics Graduate Institute (KCGI) and Dr. Shinzo Kobayashi, a part-time lecturer at KCGI and a member of the Vegetable Planet Association, received the IMS Japan Award.Dr. Emi and Dr. Kobayashi researched and developed a learning method that enables even novice farmers to efficiently acquire artisanal farming skills using the latest ICT devices, wearable cameras and drone cameras, and applied for the IMS Japan Award sponsored by the Japan IMS Association (Secretariat: Chuo-ku, Tokyo).This study is a learning method that enables beginners to efficiently acquire skills by learning from videos recorded by a skilled person wearing a wearable camera on his/her side of the head while explaining the work, and videos of the team working as a team recorded by a drone camera shooting from a bird's eye view.This learning method was also studied as an example of "blended learning" in practice, in the sense that it takes advantage of the best of two learning processes: the individualized passive learning effect of e-learning and the active learning effect of getting feedback from a skilled learner in a hands-on setting.

Dr. Emi and Dr. Kobayashi's IMS Japan Award was announced during the eLearning Awards 2017 Forum (October 25-27, 2017, in Tokyo, Japan).This award was established to commemorate the founding of the IMS Society of Japan.The IMS Society of Japan is a member of the IMS Global Learning Consortium, Inc.(IMS-GLC, founded in 1997), an association established in 2016 to promote the activities of the IMS-GLC in Japan, the IMS Japan Award is presented to cases that have developed or proposed progressive educational applications of ICT.With this award, both professors have qualified for the Learning Impact Award (LIA), which IMS-GLC will hold in Baltimore, Maryland, U.S.A. next May.The next challenge will be to win the Platinum Medal, the highest award in this world-class competition.