The KCG group, including The Kyoto College of Graduate Studies for Informatics (KCGI), Kyoto Computer Gakuin (KCG), and Kyoto Automobile College (KCGM), is as follows: “MUΣA Show” will be held by Lisa Yamasaki and other hair stylists active in the United States.The public is welcome to view the exhibition.

The "MUΣA Show" is an entertainment show featuring models and dancers in costumes, hair styling and make-up inspired by the album "MUΣA," which was created by Professor Nitza Melas to celebrate KCG's 50th anniversary (2013).Visual imagery by Lisa Yamasaki and ROSHAR, who are highly acclaimed in the American beauty industry, especially in Los Angeles, and dance by Kana Miyamoto, a top-level dancer in Los Angeles, elevate "MUΣA" to a comprehensive work of art.The "MUΣA Show" is a comprehensive entertainment experience that combines music and visual images for those interested in fashion and beauty, as well as for the general public. The "MUΣA Show" was well received at the International Beauty Show (IBS) New York in March and at the IBS Las Vegas in June.This show is part of the MUΣA Japan Tour, which begins in July.

Applications will be closed as soon as the number of participants reaches the limit.

Nitza Melas is a singer-songwriter born in Montreal, Canada, who is multilingual and has captivated audiences around the world.She is one of the three main vocalists of "Cirque du Soleil" an entertainment group that performs circuses and musicals in various countries. Among the top vocalists, she was the only one whose lyrics and music were chosen for a Cirque du Soleil show, and can be said to be the top singer in the group. He not only sings and writes lyrics, but also handles everything from graphic design to promotion and sales.Former musician's instructor, Los Angeles Music Award World Music Division, Hollywood Music Award World Music Division, DEKA Award, etc.He has sung commercial songs for SXL (S by L) and Toyota Estima, and has voice-acted for many anime and video games.Professor of The Kyoto College of Graduate Studies for Informatics since 2013.

Lisa Yamasaki After working in a salon in Japan, she moved to the U.S. and founded J's Hair Studio & Academy in 1995 in Los Angeles.She was the first Japanese to win the 2015 NAHA (North American Hairstyling Awards) Editorial Stylist of the Year award.First Japanese to appear on the main stage as a guest artist at a hair show in the U.S.The work, which is a collaboration of bold West Coast sensibility and fine Japanese technique, continues to attract many Americans as hair art.2016 Long Beach ISSE Main Stage Appearance.Member of the 2016 ISSE Long Beach competition jury.2016 New York IBS Main Stage Appearance.

ROSHAR Master makeup artist based in New York and LA.Interested in painting and fashion from an early age, she began applying makeup at the age of 15.magazine, VOGUE, ELLE, GLAMOUR, ZINK and other top fashion magazines.She has done makeup for Hollywood celebrities such as Paris, the Nikki Hilton sisters, Kanye West, and Kimora Lee Simmons, as well as numerous music videos.She has worked as an instructor for the cosmetics brands MAKE UP FOREVER and COVER GIRL, and has done makeup for RUNWAY, Paul Mitchell, L'Oréal, Wella, NY and MIAMI FASHON WEEK.Active in Canada, Moscow, and Europe, ROSHAR's sensitivity and delicate makeup have attracted many professionals.

Kana Miyamoto began ballet at the age of two and a half at a ballet studio in Fukuoka City.She has been teaching children and beginners since the age of 15.Performed as a soloist in the Ballet Studio's performances.She started jazz dancing when she was in high school, studying under the late Rei Aoo and the late Kanako Fukuoka.In 1997, she moved to the United States to perform as a member of Ken Dance Company in Los Angeles and throughout the United States.The Los Angeles Times praised the solo performance choreographed by Kenji Yamaguchi as "elegant and gripping, as if sadness were drifting across the surface, searching for itself.Currently based in Los Angeles, she teaches ballet classes at numerous studios.As a dancer/assistant director, he is a member of Kenji Yamaguchi's Ken Dance Company and has performed in New York, Los Angeles, and Tokyo.Kana's Japan Relief Fund was launched on March 11, 2011, and has been deepening exchanges with local people by conducting charity activities to plant trees in the tsunami-affected city of Sendai.She has been directing and choreographing Lisa Yamasaki's shows since 2013, and has also performed as a dancer on her tours in the U.S. and Japan.Lisa Yamasaki's productions, which beautifully express the world of her works, leave audiences with a lot of impressions. 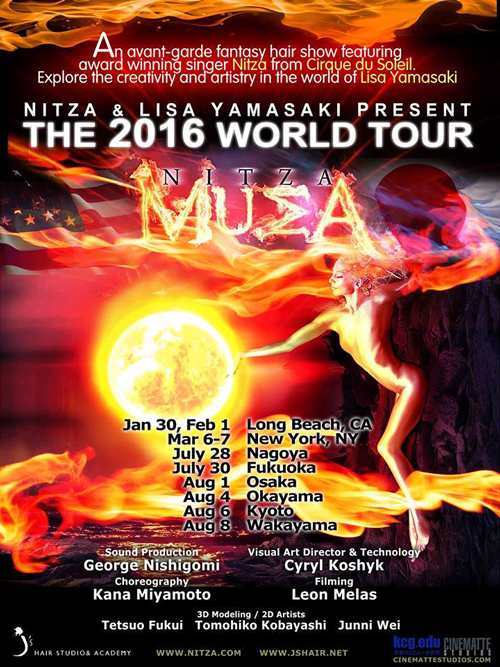