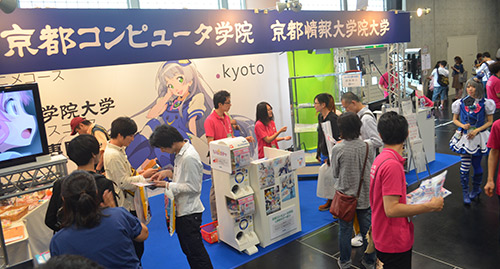 September 19 (Kyoto International Manga and Anime Fair (Kyo Mafu) 2015) (sponsored by the same executive committee and Kyoto City) co-sponsored by KCG Group (The Kyoto College of Graduate Studies for Informatics, Kyoto Computer Gakuin, Kyoto Automobile College) Saturday and 20th (Sunday), it was held mainly at the Kyoto City Kogyokan.Many people visited the KCG Group booth.In a related event, "Seiyu Spirit in Kyoto Mafu" (organized by Kyoto International Manga & Anime Fair Executive Committee and supported by KCG Group), the six finalists who passed the second screening showed off their voices and performances, drawing the attention of many people, including those standing in the audience, at the final public screening (held on January 20).The talk show by voice actor Shinichiro Miki was also a great success.

At the booth, a gacha with KCG mascot character "Kyokotan" goods will be set up.Gainax Corporation, which produced KCG's commercials, also participated in the exhibition, displaying original artwork from their animation "Houkago no Pleiades.Those who register on KCG's LINE@ will receive clear files of "Kyokotan" and "Houkago no Pleiades".The corner where visitors could take pictures with the characters was popular among children and animation fans.In addition, we also promoted .kyoto, the geographic name top-level domain that was created in cyberspace in 2015.

One of the founders of GAINAX, Yasuhiro Takeda, Director and General Manager of the Animation Production Division, is a professor and lecturer at the Kyoto Institute of Information Science.

Seiyu-tama in Kyoto is the Kyoto event of the All-Japan Seiyu-tama (Voice Actor Contest), a voice festival where junior high and high school students who aspire to become voice actors gather.Six students who passed the second screening held on September 5 at the Kyoto Computer Gakuin (KCG) Digital Sound Studio participated in the contest, and students from the IT Voice Actor Course of the Information Processing Department at KCG served as emcees, facilitating the smooth progress of the event and making it exciting.The judges were Hideo Momota, Director of the International Association for the Development of Voice Actors, voice actor Shinichiro Miki, and Professor Akiyoshi Watanabe of Kyoto University of Information Science and Technology.The grand prize winners were qualified to participate in the 4th Seiyu Soul Final to be held in Tokyo on November 22.Mr. Miki, who gave a light-hearted talk as well as judged the competition, plays Kojiro in the "Pokemon" series, Toshizo Hijikata in the "Hakuouki" series, and Aikuro Migisugi in "Kill la Kill," among many others.

For results and more information, please visit the "Soul of a Voice Actor" page: http://seidama.jp/

Prior to KYOTO CMEX, KCG held the CG Ani Cup 2015 Japan x Taiwan (organized by KCG, Doga Corporation, and the KYOTO CMEX Executive Committee) as a pre-event on September 6. 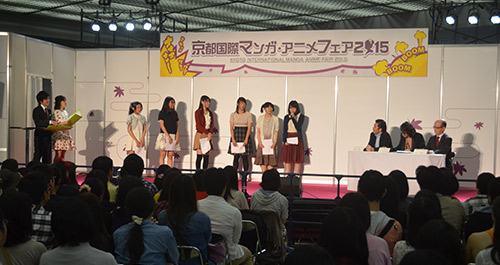 At the "Spirit of Seiyu in KYOMAFU" event, the six finalists who passed the second screening showed off their voices and performances.
END_OF_DOCUMENT_TOKEN_TO_BE_REPLACED