Minami Momochi, LOLI.COM, and Teruhiko will hold a talk show on July 21!

On Sunday, July 21, "Vocaloids, Yuru-chara, and Idols: The Evolution of Expression", the fourth of a series of talk live events under the theme of "IT and me" to commemorate the 50th anniversary of KCG Group, was held simultaneously with the open campus at Kyoto Computer Gakuin (KCG) in front of Kyoto Ekimae Campus.Guests include: - Minami Momochi, an ani-song DJ; LOLI.COM, a multi-creator who handles vocals, rapping, chorus, lyrics, composition, and arrangements; and Teruhiko, an unofficial local character from Hakodate, Hokkaido (former local mascot character Manbun).They discussed their relationship with IT and the future of a smart society (Teruhiko spoke via Twitter).The three popular Nico Nico Douga and Twitter users were also present at the event. In addition to the open campus participants, a large number of general fans visited the venue and enjoyed the light-hearted talk show, which was streamed live on the Internet.

Momochi, the world's first animated idol, says that as a child she had no connection to IT, as she did not have a computer at home.After moving to Tokyo and making his debut on Nico Nico Douga in 2009, his character spread across the Internet, and he is now a popular figure with fans all over the world.I used to have a complex about my voice, but when the staff encouraged me to try singing, many people supported me.Surprisingly, even things that we wish we could keep locked away can be accepted.I learned to challenge rather than limit," he said.The Internet is a tool that allows us to freely express our feelings and to upgrade ourselves through various discoveries.Why don't you dive in without hesitation?

On the other hand, LOLI.COM, who has been familiar with IT since childhood, using a computer since he was 4 years old because of his father's work, began composing music on a computer in the first year of junior high school.In 2012, he made his major debut and now has many fans as a multi-creator who not only composes music but also sings vocals, raps, choruses, and writes lyrics.He said that he has always wanted to incorporate rap and funky elements into his music.Mr. LOLI.COM, who said, "IT came first, and then I entered the world of music." His message to the smart society is to use IT to dig deeper and deeper into yourself, but he also said, "In a world like the current Internet society, which is open from the beginning, we tend to flow in the direction of the easy way.For example, they tend to choose only easy communication and become poor at building important analog relationships, which must be avoided," he warned.

Teruhiko is working hard to revitalize local communities in Hokkaido, including Hakodate, and is currently holding a nationwide tour called "Teruhiko Festival.His real name is Teruhiko Ohashi and his age is 9 years old.In this live talk session, he made a series of unique "jabs" at the talks of the other three via Twitter, which drew laughter from the audience.As a message to students studying IT, he joked a bit and said, "IT is a kind of tool to make what you have been struggling with easier.I don't think IT is about simplifying life and creating ease," he said.

LOLI.COM's impromptu singing and Momochi's dancing were also performed, and visitors had a good time while being soothed by each character.

Talk Live "Me and IT" Series No. 4 "Vocaloids, Yuru-chara and Idols: The Evolution of Expression
http://kcg.edu/50th/events/私とit桃知みなみ, Loricom Teruhiko/ 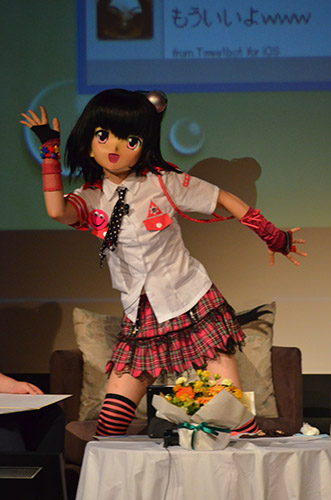