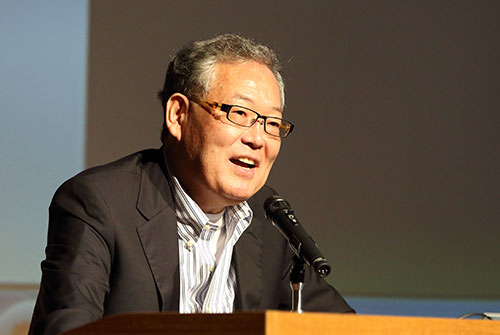 Mr. Norio Murakami, speaking on "What Google is trying to do and the new horizon of ICT

The fifth lecture in the KCG Group's 50th anniversary series, "What Google is Trying to Do and New Horizons for ICT," was given by Mr. Norio Murakami, former President of Google Japan, Vice President of the U.S. headquarters, and Representative of Norio Murakami Office, at the Kyoto Station Satellite Hall of The Kyoto College of Graduate Studies for Informatics on April 13.Mr. Murakami introduced the history of Google, which was founded in a private garage by Stanford University graduate students and has grown into a world-class company with approximately 30,000 employees and sales of approximately 3 trillion yen, and explained the company's future strategy and current Internet trends such as smart TV and big data in an easy-to-understand manner.In addition to KCG students, many members of the public attended the lecture.

In 1998, three years after the founding of Yahoo, whose business was to build Internet portals (table of contents), Google Inc. was born as an indexing company.Mr. Murakami described Google's business model as follows: "The basic idea is to organize information from around the world and provide services that can be accessed by people around the world for free.Revenue is from advertising only.Although some sales are now generated in other areas, advertising still accounts for about 95% of our sales," he explained.The initial equipment was all computers built by the employees themselves using soldering irons and wire wrapping.We were too cost-conscious to buy computers because we were offering them for free," he said.Google Inc. established an unshakeable position in the world as the "search engine" of the Internet, and at the same time expanded its search framework one after another to include news, books, location information (Google Maps Earth), and video through the acquisition of YouTube.Of these, YouTube is currently offered in 23 countries around the world and is used by 1 billion people per month.

In order to secure servers for cloud computing services, Google Inc. has taken advantage of the "Green New Deal" policy of the U.S. Obama administration and established container-type data centers in various parts of the country.Regarding the company's current efforts, Mr. Murakami said, "Data centers use a considerable amount of electricity to cool computers, but we must reduce this power cost in order to achieve a 'green' environment.Google is currently refining this technology and beginning to work with renewable energy sources such as solar, offshore wind, and geothermal.At the same time, we are also working on a smart grid," he introduced.He added that home appliance manufacturers are rushing to commercialize "smart meters" and "smart power outlets" that allow users to check their electricity consumption via the Internet.

As a "new horizon of ICT," Murakami stated, "Following the emergence of wearables (small computers that can be worn on the body), such as smart watches and smart glasses, the era of smart TVs is coming next.Smart TVs are considered to be an advanced form of TVs that not only add PC and Internet functions to conventional TVs, but also have a layered structure.The layers that support the entire ecosystem will be handled by Google, Apple, and Microsoft.In fact, the "application layer" of billing and delivery management that connects the "physical layer" (hardware) and the "content layer," which is handled by consumer electronics manufacturers, is completely untouched.There is a huge business opportunity here," he explained.Just as students in the U.S. have taken advantage of business opportunities, I hope that students from KCGI and KCG in Japan will be the next to become the second Google Corporation," he urged.Regarding big data, he said, "Right now we are at the 1.0 to 1.5 stage.Research on making computers understand the meaning of sentences, such as through artificial intelligence technology, is being pursued rapidly by the U.S. Department of Defense.In Japan, the IT Fusion Forum Expert Group was established in June of this year, and is steadily making progress," he introduced.

50th Anniversary Lecture "What Google is Trying to Do and New Horizons of ICT
http://kcg.edu/50th/events/グーグルがやろうとしていることと, ict's new horizon/