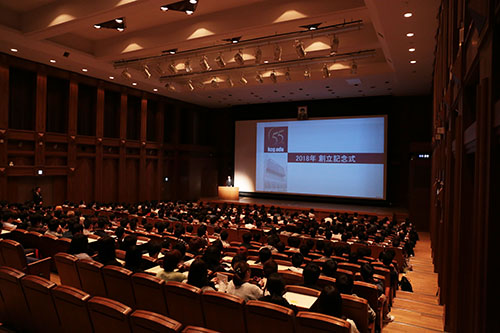 May 1, 2018 is KCG Group's 55th anniversary.Prior to this, on April 27, a commemorative ceremony was held at the main hall of the Kyoto Station Satellite of Kyoto Institute of Information Science, where students and faculty members celebrated the achievements of the KCG Group in education and research over the past half century, and pledged the further development of the Group.

At the beginning of the ceremony, all participants confirmed the pioneer spirit, the founding spirit of the school.The foundation of the KCG Group was the "FORTRAN Research Group" founded on May 1, 1963 by a group of graduates of the Department of Astrophysics, Kyoto University, and later, in 1969, Kyoto Computer Gakuin was established as the first full-time school in Japan for the training of computer engineers.KCG's founders, Shigeo Hasegawa, the first president of KCG, and Yasuko Hasegawa, the current president of KCG, believed in the potential of computers at a time when the term "IT" did not even exist, and their belief in training information processing engineers was born.The students and faculty members of the KCG Group recalled this pioneering spirit of taking on challenges in unknown fields and contributing to humanity, and reflected on the weight of the 55-year history of the KCG Group supported by this spirit.

Next, Dr. Kazuki Maenou, Head of the Computer Science Department at KCG, gave a lecture titled "The Significance of Studying at KCG.Looking back on his own studies at KCG, Dr. Maenoh, who entered KCG after graduating from Ryukoku University and studying IT, said that learning programming was a lot of fun and that it made him jump right into new things.He also shared his experience of co-developing an application with Microsoft during his school days. Although there were many hardships, the joy of creating something and the sense of accomplishment attracted him to IT work, and he decided to return to his alma mater, KCG, to become a teacher.He also encouraged the students in the audience that IT is a technology that enriches people's lives and makes the world more enjoyable, and that by learning the basics of IT at KCG, they will be able to be involved in the development of cutting-edge technologies such as automatic car driving, virtual currency, drones, and VR in the future.Finally, "KCG is a school where those who want to learn IT can learn as much as they want.Don't be afraid of failure.Even if you fail, you can get over it with a smile if you are with your friends.He concluded his speech by saying, "I hope that you will carry on the 55-year history of KCG built by our seniors and create the future of KCG.

More than 40,000 graduates have left Kyoto Computer Gakuin over the past 55 years.In April 2004, The Kyoto College of Graduate Studies for Informatics (KCGI), Japan's first IT professional graduate school, was founded and joined the KCG group. In 2013, Kyoto Automobile Specialist, the oldest automobile mechanic training school in Kyoto The school (KCGM) also joined the group. The 55th anniversary celebration will be held on November 1. 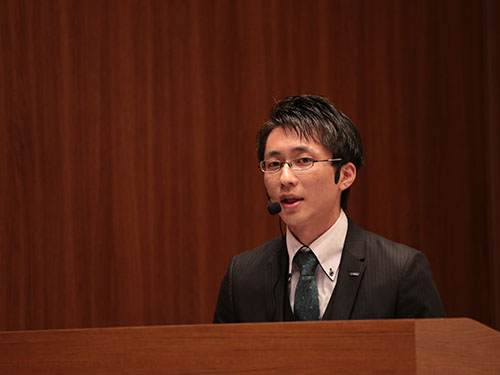 Dr. Kazuki Maenou speaks on "The Significance of Studying at KCG.
END_OF_DOCUMENT_TOKEN_TO_BE_REPLACED