Many people came to the event, which was co-hosted by KYOMAFU!

"Kyoto International Manga Anime Fair (Kyo Mafu) 2014" (sponsored by the same executive committee, hosted by Kyoto City) co-sponsored by the KCG Group (The Kyoto College of Graduate Studies for Informatics, Kyoto Computer Gakuin, etc.) On both days of the day, the event was held around the Kyoto City Kyogyokan, and many manga and anime fans visited from outside of Kyoto.KCG Group will have a booth at the "Miyako Messe" venue, where KCG mascot character "Kyokotan" goods will be available for purchase and live painting will be performed.In addition, Kyoto Computer Gakuin Kyoto Ekimae School hosted a variety of related events, including the final judging of the Kyoto contest of the All Japan Voice Actor Contest "Seiyu-Tama," a voice contest for junior high and high school students, and a screening of the TV animation "Arikuten Kazoku" written by Tomihiko Morimi, which won the Japan Media Arts Festival Excellence Award, and a talk show featuring voice actress Mamiko Noto, which attracted many visitors.The KCG Group was also in charge of planning, editing, and production of the official guidebook for the KYOMAFU event, which was well received.

At the opening ceremony held at Miyako Messe on March 20, organizers Takayuki Matsutani, chairman of the KYOMAF Executive Committee and president of the NPO Visual Industry Promotion Organization, Daisaku Kadokawa, mayor of Kyoto City, and Wataru Hasegawa, chairman of the KCG Group, which co-hosts the festival, took the stage to greet the opening ceremony and break open a mirror.

At the KCG booth at Miyakomesse, an oversized "Kyokotan" greeted visitors.The "Kyokotan Gacha" drew a long line of fans, as they could win a clear file, sticker, or can badge of Kyokotan.Live paintings will be shown in "Sleep in Magdalene" (Dengeki Bunko), "The High School Demon King's Decision" (Gaga Bunko), "School Democracy!Tetsuhiro Nabeshima, a designer of glasses for TOHO MEGANE, as well as illustrator of light novels such as "KODANSHA RANOBE BUNKO" (Kodansha Ranobe Bunko), is in charge of the project.The original Kyokotan was painted and attracted many visitors to the booth.In addition, commercials currently being aired on YouTube and a DVD introducing Kyoto Institute of Information Science and Technology and Kyoto Computer Gakuin University were shown to promote the event. 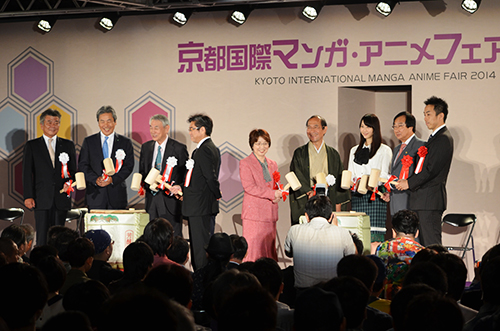 Organizers celebrate the opening of KyoMafu by breaking open the Kagami-Wari.At the far left is Wataru Hasegawa, President and CEO of KCG Group, which is co-sponsoring the event. 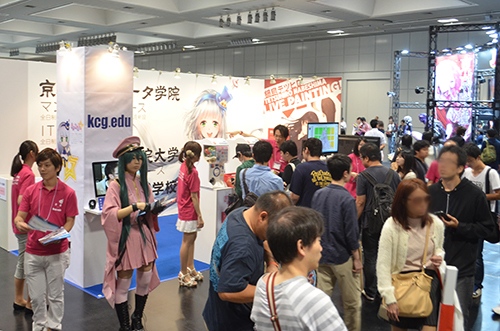 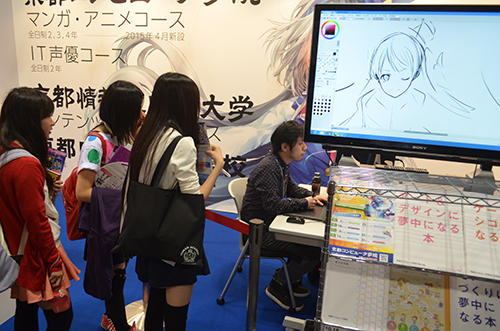 The final judging of the Kyoto SeiyuTama competition (hosted by the Kyoto Mafu Executive Committee, supported by KCG Group, the Kyoto Shimbun, and NHK Kyoto Broadcasting Station) was held at the Kyoto Station Satellite Hall of the Kyoto Institute of Advanced Media Arts and Sciences on April 20, with 23 finalists from over 150 applicants from Kyoto City and other areas in the Kinki region participating.In addition to Mr. Hideo Momota, the head judge of the Voice Actor Division of the "Spirit of Seiyu" competition and director of the International Association for the Development of Voice Actors, and officials from the Kyoto Municipal Transportation Bureau, KYOMAFU Secretariat, and KCG Group, guest judge Yen Yonezawa, a voice actress widely known for her roles in games and radio, including "Yui Hirasawa" in the anime "K-ON", also served as a judge.

The contestants were nervous, but they showed their young power and sensitivity to the fullest.

Afterwards, the results were announced and an award ceremony was held at Miyakomesse.The winner of the Grand Prize will receive the right to participate in the finals of this competition to be held in Tokyo in November.Three of the special award winners will be the main personalities in a special radio program on Nippon Broadcasting System, a special program on α-station (FM Kyoto), and another three, also special award winners, will be the voice actors of Kyoto City Transportation Bureau characters (Moe Ohata, Saki Matsuka, and Misa Ono). 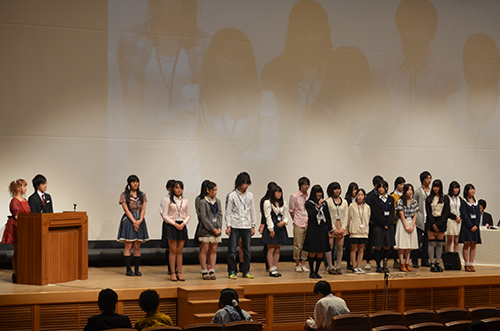 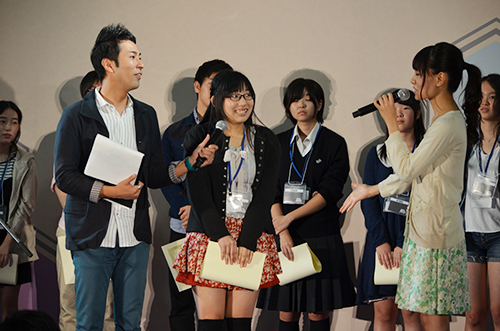 The winner of the Grand Prize, with a big smile on his face.Six other special award winners were also selected (Miyako Messe).

The final selection for the "Miss KYOMAFU 2014" contest (sponsored by the KYOMAFU Executive Committee and supported by KCG Group) was held at Miyako Messe on April 20 to select the ambassadors for various events in Kyoto City, including KYOMAFU, and seven contestants participated in the judging.

The seven students introduced themselves and showed off their favorite "Kyoto words.

One grand prix winner (50,000 yen prize) and two runners-up will be selected.The winner of the Grand Prix will wear the kimono costume of Tomoe-chan for one year. 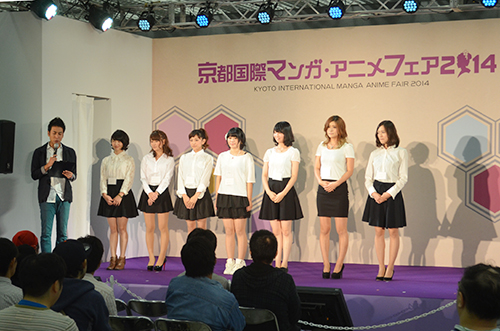 Judging for the "Miss Kyomofu 2014" contest at Miyakomesse.

The TV anime “Etsuten Family” will be screened with a selection of programs related to “Benten-sama”, the key to the story, and a talk show (sponsored by KBS Kyoto, co-sponsored by KCG Group) will be held on the 21st. , The Kyoto College of Graduate Studies for Informatics was held at the Kyoto Ekimae Satellite Hall and packed with many “Benten fans”.

A total of seven films were screened.Afterwards, a talk show was held with Mamiko Noto, the voice actress who plays Benten, director Masayuki Yoshihara, producer Kenji Horikawa, and special guest Tomihiko Morimi, the author of the original story.

Ms. Noto said of her role as "Benten", "Benten is like a bad girl, but at times she is naive and girlish.There are many different ways to play a role, so I learned as I went along," he said.Director Yoshihara said, "We did not set up Benten or any of the other characters, but asked the actors (voice actors) to play the characters as they read the story and received it.Producer Horikawa said, "The first episode has finished airing, but I am looking forward to seeing how the sequel will be made," to which Morimi replied, "The second episode will be written soon.I think we will be able to air it early next year, so please look forward to it," he said, to the delight of the fans in attendance. 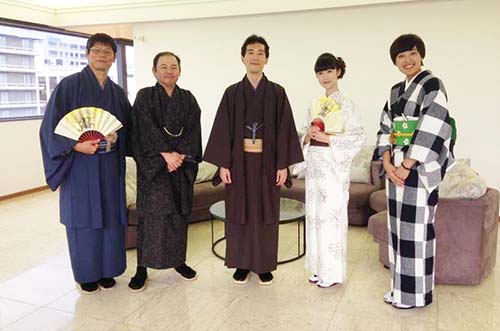 A commentary screening featuring Sayaka Horino as Mikine Morimatsu and Eiri Yamazaki as Hibari Torikai, voice actors of the 5-minute anime "Inugami-san and Nekoyama-san" broadcast by KBS Kyoto and others, was held at the Kyoto Ekimae Satellite Hall of the Kyoto Institute of Information Science on March 21.While watching the video, Ms. Horino and Mr. Yamazaki shared their memories and behind-the-scenes stories of each scene, much to the delight of the visiting fans.