The First Workshop of the Kyoto Manga/Anime Society was held 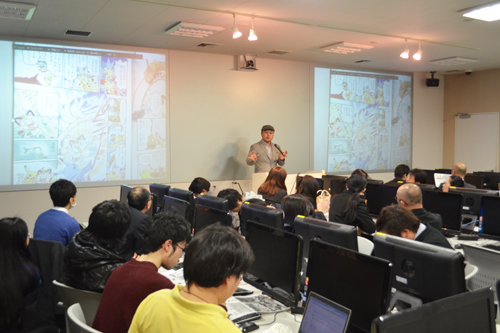 Yoshimura, the director of the Kyoto International Manga Museum Research Center and the head of the Kyoto Seika University Manga Department at the first meeting of the Kyoto Manga and Anime Society. Mr. Kazuma = February 14, 2015, The Kyoto College of Graduate Studies for Informatics Kyoto Station Satellite

“Kyoto Association for Manga and Anime Studies”, established mainly by Kyoto University of Information Studies and Kyoto Computer Gakuin (KCG Group), February 14, 2015 (Sat), 1st research The meeting was held at the The Kyoto College of Graduate Studies for Informatics Kyoto Station Satellite.Many of the visiting academy members engaged in discussions during keynote speeches by Kazuma Yoshimura, Director of the Kyoto International Manga Museum Research Center and Dean of the Faculty of Manga Studies at Kyoto Seika University, and presentations of research and artwork.The society is unique in that not only companies, educational institutions, creators, and researchers involved in manga and animation, but also general fans, including junior high and high school students, can join. The association will continue its activities with the aim of creating an international network of manga and animation human resources in Japan.

At the workshop, KCG Group President Wataru Hasegawa, who assumed the presidency of the society at the board of directors' meeting held earlier in the day, addressed the participants, saying, "I would like to work with our members to make the society, which was established in Kyoto, a symbol of Japanese culture and tradition, a world-class presence.After reporting on the activity plans for FY2015 decided by the Board of Directors, including: the transition of the exchange portal site and the official site to the ".kyoto" domain; participation in the Kyoto International Manga and Anime Fair (KIMAF) 2015; and the creation of a book database of the Kyoto International Manga Museum and collaboration with the portal site, Mr. Yoshimura spoke on the theme of "The Meaning of Making Manga and Anime an Academic Field: Japan, Kyoto, and Universities.

Mr. Yoshimura, who teaches at the Faculty of Manga Studies, prefaces his comments by saying, "I often hear people ask whether manga is an academic subject, or whether the government should invest taxpayers' money in an anime facility, but I think these are questions that arise from a very healthy awareness.The Japanese are also very close to manga, as can be seen from the fact that there are far more new and used manga bookstores than in any other country in the world.This environment, combined with the rapid computerization of production, distribution, and dissemination processes, has led to the growth of animation and other genres that have attracted worldwide attention over the past couple of decades," he stressed.He cited the example of the Japanese industry being troubled by the existence of pirated copies overseas, but the fact is that pirated copies have dramatically expanded the high quality and name recognition of Japanese manga and anime around the world.