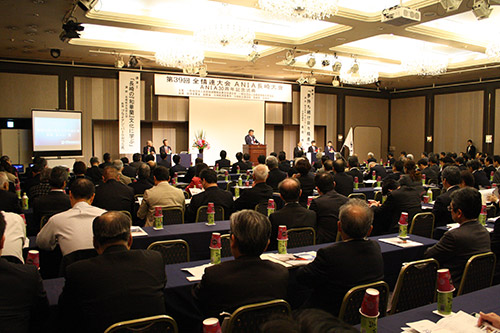 Nagasaki, National Association of Information Technology Associations of Japan (ANIA), chaired by Dr. Wataru Hasegawa, President of KCG Group of The Kyoto College of Graduate Studies for Informatics (KCGI), Kyoto Computer Gakuin (KCG), Kyoto Automobile College (KCGM) The tournament was held in Nagasaki City on November 9, and more than 250 people from all over the country participated.ANIA is an organization that aims to create the society of the future through the development of the local information and telecommunications industry and the improvement of information and telecommunications infrastructure.This year also marked the 30th anniversary of ANIA, as it has been 30 years since the parent organization of ANIA was formed in 1987.

At the beginning of the conference, Mr. Kazuhide Nakano, Chairman of the Nagasaki Information Industry Association, gave a speech on behalf of the organizers entitled "Local Creation through ICT, Again from Dejima!He then addressed the audience by calling for "the use of ICT is the key to counteracting regional depopulation and revitalization, and the role of ANIA, an organization of regional associations, is becoming increasingly important.To this end, ANIA has many issues to resolve, such as resolving the shortage of IT personnel.Let's all join forces and overcome this problem," he said.

Next, ANIA President Wataru Hasegawa gave a speech, saying, "Computers have developed rapidly over the past 30 years, and society is undergoing a major transformation with the advent of AI, IoT, Big Data, and other technologies.In these times, ANIA would like to contribute to the promotion of regional economies and, by extension, the entire country's information industry by actively working as a forum for the exchange of opinions and information among members and associations in each region," he said, expressing ANIA's determination to continue to actively engage in activities in response to the evolving information society.Next, Mr. Nobuyoshi Fujioka, Director, Office for Promotion of Regional Informatization Human Resource Development, Commerce and Information Policy Bureau, Ministry of Economy, Trade and Industry, and Mr. Shogo Matsuda, Director, Office for Promotion of Regional Informatization, Information Sharing Administration Bureau, Ministry of Internal Affairs and Communications, gave remarks as guests of honor, congratulating ANIA on its 30th anniversary and expressing great expectations for further success in the future.

After the convention, a reception was held, and after the opening of a sake barrel with the participation of President Hasegawa, members actively exchanged opinions about the status of the local information industry and future activities, deepening exchanges and pledging the next 30 years of ANIA's development.A video message from Nagasaki City Mayor Tomihisa Taue was also shown during the session. 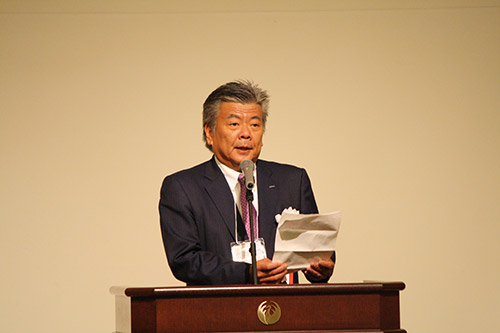 Wataru Hasegawa, Chairman of the Board of Trustees, addresses the audience on behalf of the organizers. 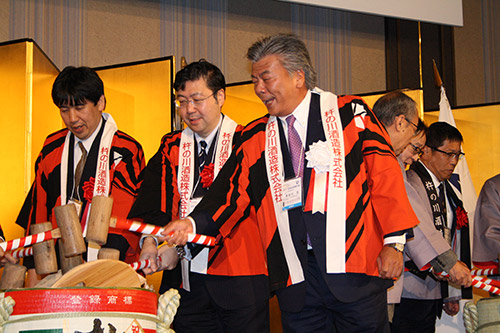 Wataru Hasegawa, Chairman of the Board of Trustees, opening a sake barrel at the reception.
END_OF_DOCUMENT_TOKEN_TO_BE_REPLACED