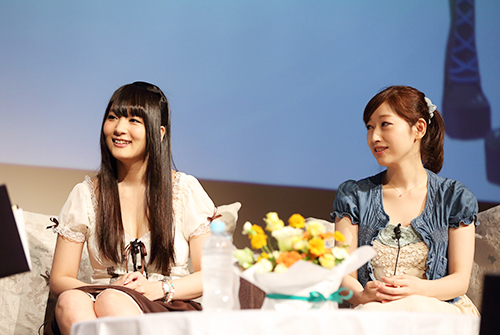 The PC is my entertainment friend!"Popular voice actors Hiromi Igarashi (right) and Ayano Yamamoto (center) talk with humor on the theme of

Igarashi, whose mother is from Kyoto and who was born in Kyoto, had a personal computer at home as a child but did not have much opportunity to use it, and only used it to write reports when she became a university student.As for IT, he expressed, "I don't really feel directly involved as a voice actor, but they support our activities in ways that I can't see.

On the other hand, Mr. Yamamoto, who says he has only been to Kyoto for a school trip in a game, said, "I have been immersed in online games since my high school days, and recently I have been refraining from playing them because I have been reflecting on how much I have spent on them.It's easy to create a website or blog, and if you don't understand something, you can look it up right away.I think IT is amazing," he said.

Yamamoto also said to the students, "IT has made it possible to take for granted things that were unimaginable in the past.I hope you will be flexible and create wonderful things with IT," said Mr. Igarashi. "My passion for manufacturing is the same no matter what kind of work I do.I entered college with nothing I wanted to do, but I envy you all because you have the goal of IT.I hope that you will never give up and realize your goals while cherishing the good old things, such as history.

Ms. Yamamoto is a new voice actress who has not only worked extensively as a voice actor in animation, games, and web radio, but also has a background as an actress and TV personality.Major works include ◇Anime: "ROBOTICS;NOTES" (Tennoji Nene), "Steins;Gate" (Tennoji Nene), "Nukko.(Nukko) ◇Games: "Labyrinth Cross Blood Infinity" (Minase Shizuna), "Senran Kagura Shinovi Versus: Shiki", "Fire Emblem: Awakening" (Sumia, Cynthia) and many others.She has appeared in commercials such as "KOKOKO" (KOKOKO-chan) and "GMO CLICK SECURITIES" and in dramas such as "GARO - MAKAISENKI" (as Ririka) and "Mei-chan no Butler" (as Eriko Hino).