The Kyoto International Manga/Anime Fair (KYOMAF) 2017, the largest manga/anime trade fair in western Japan, was held on September 16 (Sat.) and 17 (Sun.) at the Kyoto Municipal Industrial Exhibition Hall (Miyakomesse) and was co-sponsored by the Kyoto Computer Gakuin, Kyoto Institute of Information Science, and Kyoto College of Automotive Technology (KCG) Group.The KCG Group booth hosted many exciting events, and despite the arrival of Typhoon No. 18, many people came to see the event.The "Seiyu-tama in Kyomafu - Seiyu-tama Kinki Competition" (supported by KCG Group), which featured voice actress Yuki Yoneuchi as a guest, was held on the 17th, and the "CG Ani Cup Japan x Korea" (18th), held at the KCGI Kyoto Ekimae Satellite Large Hall as a linked event, was also very exciting. 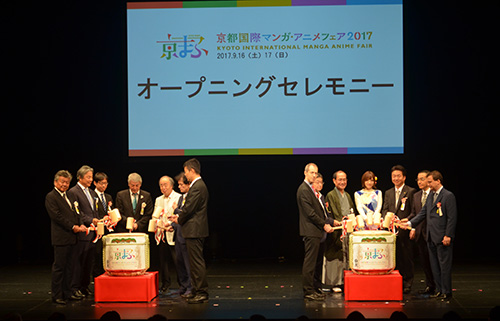 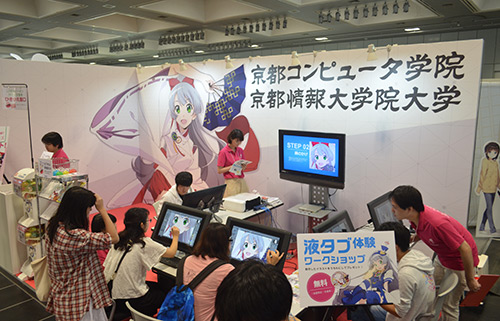 The KCG booth at KYOMAFU, which was visited by a large number of people.Liquid tab experience workshop" was well received (September 16-17).

Many people participated in the "Liquid Tablet Experience Workshop," where they could use an LCD pen tablet to color Kyokotan and make their own original fan.The "Kyokotan" clear file that was given to those who registered on KCG's LINE@ was also well received. 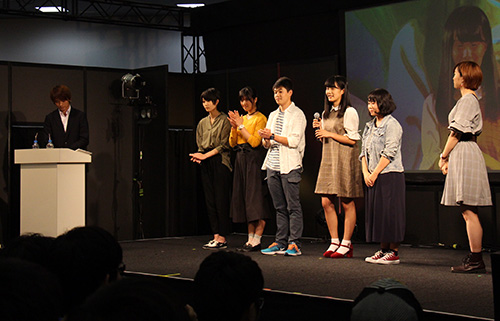 At the "Seiyu-tama in Kyomafu - Seiyu-tama Kinki Competition," five students who passed the second screening participated and showed the results of their practice (September 17).

The "Seiyu-tama in KYOMAFU - Seiyu-tama Kinki Competition" is an international voice talent contest where junior high and high school students who aspire to become voice actors gather to compete for the right to participate in the 6th "Seiyu-tama" main contest.The five students who passed the second round of judging held on September 3 at KCG Kyoto Ekimae School took on the challenge of representing the Kinki region.The guest judge is Yuki Yoneuchi, a voice actress known for her roles as Maro Kitahara in "Piace - My Italian" and Haruki Bando in "Cheer Boys.Hideo Momota, Director of the International Association for the Development of Voice Actors, and Akiyoshi Watanabe, Professor of Kyoto University of Information Science and Technology, judged the entries and selected one grand prize winner and two judges' special prizes for the 6th Seiyu Tamashii Final to be held in Tokyo on November 19.After the event, Yoneuchi gave a talk session in which she explained why she wanted to become a voice actor, her career path, and advice for aspiring voice actors.For results and more information, please visit the "Soul of a Voice Actor" page.

Soul of a Voice Actor
http://seidama.jp/ 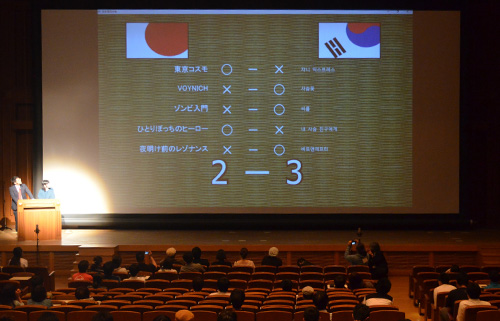 The CG AniCup 2017 Japan x Korea" is a joint event of KYOMAFU 2017 organized by KCG, the Executive Committee of East Asian Cultural City 2017 Kyoto, Kyoto City, and Doga Corporation (Head office: 2-5-11 Nihonbashi-Nishi, Naniwa-ku, Osaka City, Representative: Masaru Kamata).On September 18 (Mon.), a large number of CG and animation fans from all over Japan gathered at the KCGI Kyoto Ekimae Satellite Main Hall.The competition was based on the quality of five animations selected from Japan and Korea, with Korea winning by a narrow 3-2 margin.All were highly skilled, humorous, and high-level works that entertained visitors. The CG Ani Cup is a team competition in which CG animation creators bring their works and form teams according to country or region to compete for the best results.Each team consisted of five members, and in the same way as in team competitions in judo and kendo, the "Spearhead" and "General" presented their works in order, and the winner was decided by the five judges and the applause of the audience.