Japan defeats Taiwan by the narrowest of margins!Many fans go to KCG for CG Anika Cup 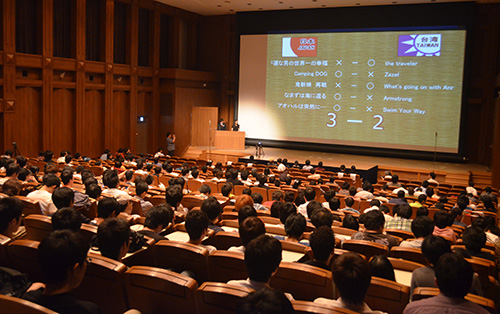 CG Ani Cup 2015 Japan x Taiwan" was held on Sunday, September 6, 2015 at the Kyoto Station Satellite Hall of Kyoto Institute of Information Science, organized by Kyoto Computer Gakuin (KCG), Doga Corporation (Head Office: 2-5-11 Nihonbashi-Nishi, Naniwa-ku, Osaka, Japan, President: Masaru Kamada) and the KYOTO CMEX Organizing Committee.Many CG and animation fans gathered at KCG from all over Japan.The competition was based on the quality of five animations selected from Japan and Taiwan, with Japan winning by a narrow 3-2 margin.All were highly skilled, humorous, and high-level works that entertained visitors.

Students from the IT Voice Actor Course of the KCG Information Processing Department served as emcees and helped to liven up the event.Prior to the match, KCTO (The Kyoto College of Graduate Studies for Informatics) and KCG President Hiroshi Hasegawa, representing KYOTO CMEX on behalf of the organizer, said, “There are different cultures in different countries of the world, and the work has its own color. Appears.If more opportunities for such exchanges are opened, it will lead to the development of human culture as a whole.Tainan City in Taiwan, which has been focusing on the development of its animation culture and industry, is deepening its cultural exchange with Kyoto City.I look forward to the expansion of international exchange not only in the field of content but also in various other areas in the future," he said.Representatives from both Japanese and Taiwanese teams expressed their eagerness to play each other.

The CG AniCup is a team competition in which CG animation creators bring their works and form teams according to country or region to compete for the best results.Each team consists of five members, and in the same way as in team competitions in judo and kendo, the teams present their works in order from "Spearhead" to "General," with the winner determined by the applause of the five judges and the audience, with the three winners winning.The judges for this year's competition were Ryo Akiyoshi, representative of the animation circle "Graphic Park," Ryosuke Nakanishi, animation artist, and KCG instructors.The Japanese and Taiwanese teams were very close in ability, and the game went all the way to the final round of the tournament, which Japan won in a landslide.

On November 23, the exhibits will compete in the "Taiwan Ani Cup" in Tainan City, Taiwan.Taiwan will change its lineup to new works, and the results may change when Taiwanese people judge the competition.

This CG AniCup is positioned as a pre-event of "Kyoto International Manga/Anime Fair 2015" (September 19-20 at Miyako Messe, etc., co-hosted by Kyoto Institute of Information Science and Technology and Kyoto Computer Gakuin University).