I want to work toward the future."KCG Group Holds 2014 Entrance Ceremony 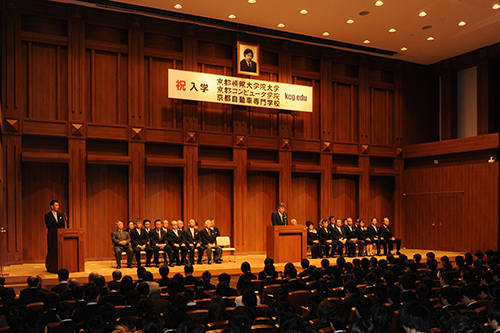 The 2014 entrance ceremony of Kyoto College of The Kyoto College of Graduate Studies for Informatics (KCGI), Kyoto Computer Gakuin (KCG) and Kyoto College of Motor Vehicles (KCGM) was held on April 6 (Sun.) at KCG Kyoto Ekimae School, connecting each satellite of KCGI.This is the first joint entrance ceremony with KCGM, which has joined the KCG group.New students from the IT Voice Actor Course, newly established in 2014 in the KCG Information Processing Department, also attended.At the ceremony, the representative of the new students made a strong pledge: "We are determined to move forward with all our efforts toward the future that each of us has envisioned.

The main hall, Kyoto Station Satellite Hall of The Kyoto College of Graduate Studies for Informatics, was filled with new students, parents, and people concerned, and the foyer and classrooms were also used as venues.

After watching a video introducing the history of KCG Group, which was established in 1963 as the first computer education institution in Japan, Wataru Hasegawa, President of KCG Group, gave a speech.He then welcomed the new students from Tokyo Satellite (Motoazabu 3-chome, Minato-ku) and Sapporo Satellite (Odori-Nishi 5-chome, Chuo-ku, Sapporo), saying, "KCG Group is boldly exploring new fields while maintaining its traditions and achievements.We will continue to explore new possibilities and take on new challenges to become a school that you can be even more proud of.Each of you is already a member of our university.Please take pride in your decision to study at this university and make the most of your student life," he encouraged.He also introduced the 50th anniversary of the foundation in 2013, the future plans to open overseas educational centers in Japan and abroad following the Tokyo and Sapporo satellites, and that KCGI will operate the top-level geographical name domain ".kyoto" from FY2014 as the management operator of the domain.

KCGI President Toshihide Ibaraki then emphasized the overwhelming power of computers, citing such examples as the calculation of pi, which is 10 trillion digits, and the victory of computers over humans in chess and shogi, but pointed out that it is only humans who write the programming for these computers.Learn ICT (Information and Communication Technology) and use the knowledge you acquire to take on new challenges.However, although computers are very powerful and convenient, they are only tools.I hope that students will be able to use computers instead of being used by them," he said in his ceremonial address.

In response, Mr. Hiroki Shiotani (Department of Informatics, Nara Prefectural Koriyama High School), a representative of the new students, said, "Today, information technology has developed on a global scale, but the number of incidents involving the illegal use of information technology is increasing day by day.We believe that information technology engineers are given the task of making society more convenient, comfortable, and secure in the use of information technology.We will learn not only specialized knowledge and skills from our professors and seniors, but also a rich humanity. We will grow every day, taking responsibility for our own actions while making many friends who can cooperate and support each other to gain a broad perspective.

This was followed by an orientation and parent-teacher conference, where the students took their first steps as members of the KCG family.

Congratulations on your enrollment.We support all of you in your endeavors.