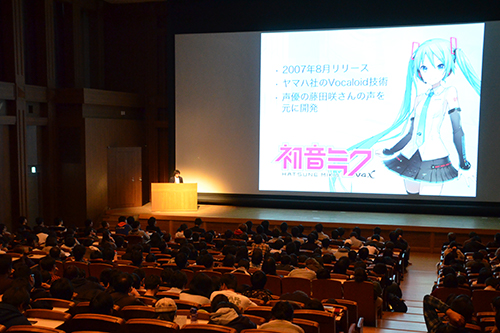 Professor Hiroyuki Ito of The Kyoto College of Graduate Studies for Informatics (KCGI), creator of the globally popular Vocaloid (VOCALOID) "Hatsune Miku" and CEO of Crypton Future Media, Inc.Professor Ito explained the birth and growth of "Hatsune Miku," her approach to voice technology and 3DCG technology, and her wide-ranging activities in Japan and abroad, using video clips.The special lecture was simultaneously relayed to KCGI's Hyakumanben Campus in Kyoto and satellites in Sapporo and Tokyo via a state-of-the-art system with simultaneous English interpretation, and the participants listened intently to the leading experts in the content business.

Hatsune Miku" is a virtual idol created on August 31, 2007.It is a software program that sings a song by voice synthesis when lyrics and melody are inputted, and is a popular "character" of 158 cm tall, 42 kg, and 16 years old.Live concerts are held not only in Japan but also overseas, symbolizing the Cool Japan movement to promote Japanese culture to the rest of the world.

The title of the special lecture is "The Potential of Digital Content Learned from Hatsune Miku.After introducing Krypton's work and explaining the basics of computer music, Professor Ito said, "Vocaloid is a virtual instrument (sound source) that synthesizes human singing voices.Hatsune Miku is software that sings songs, commercialized by Crypton using Vocaloid technology," he explained.

When a character was added to "Hatsune Miku," people began to create not only music, but also a figure and post it on the Internet, creating a chain of creativity that spread.Professor Ito explained, "(Hatsune Miku) tends to be thought of as primarily a voice synthesizer and the characters as an afterthought, but thanks to the characters, it was easy to start a chain of creativity.Then, for the rights handling of creative works, he opened a license to the public and a content submission site "peer pro".Professor Ito said, "We have made it a rule that any work submitted to the site may be used for other works by any user of the site.We created an environment that facilitated the creation of creative work," he revealed.

Eleven years have passed since the birth of "Hatsune Miku.As a result of secondary and tertiary creations by creators, the ways of expression have expanded beyond song and voice to include dance, animation, cosplay, figurines, etc., and have been commercialized in fashion, opera, robots, racing teams, games, Japanese drums, popular TV animation characters, and more.Professor Ito said, "We are trying to expand the area (of activity) of 'Hatsune Miku' and collaborate with diverse fields.

Hatsune Miku" has been performing and appearing at many events in Japan and abroad.In 2018, the group toured events in seven cities on the North American continent, and continues to perform on the big stage in Japan, performing with jazz and taiko performing arts groups and in symphony concerts.There is also a Chinese version, with concerts in Beijing and three other cities in October.In August 2019, "Cho-Kabuki" is scheduled to be performed at the Minami-za Theater in Kyoto.

Prof. Ito assumed the position of Professor at KCGI in April 2013.In recognition of his international activities and technological innovations, he was awarded the Medal with Blue Ribbon in the fall of 2013.KCGI and KCG have a reciprocal class auditing system.Not only students related to the content business at KCGI, but also students studying content-related fields such as KCG Art and Design, Digital Games, and the IT Voice Actor Course in the Information Processing Department of the Computer Science Department can learn a lot from Professor Ito's efforts. 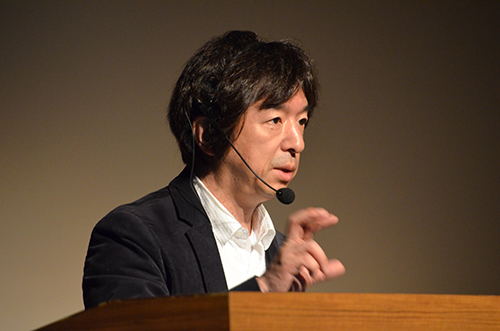