Commemorative lecture held in Sapporo to celebrate the 50th anniversary of the company's founding and the first year since the opening of the Sapporo satellite.

On Tuesday, February 19th, at the Hotel Okura Sapporo in Sapporo City, we will hold a lecture “Let's send to the world from here” in commemoration of the 50th anniversary of the establishment of the kcg.edu Group and the first year of the The Kyoto College of Graduate Studies for Informatics Sapporo Satellite. did.Two representatives of Hokkaido's IT industry spoke, and many participants listened with great interest.

The first speaker was Dr. Tsuyoshi Yamamoto, Professor of Hokkaido University Graduate School of Information Science and Technology and Deputy Director of the Industry-Academia Collaboration Division.Dr. Yamamoto, who is also known as a storyteller of the Sapporo Valley, looked back on his career as a leading figure in industry-academia collaboration, from his days as a student enthusiastically researching computer graphics images to his investment in the establishment of an IT company and his participation in corporate activities.He added, "We must not chase change, but propose it ourselves.It is important to have a 'backcasting' mindset, where we develop technologies based on what we want to do, rather than thinking about what we can do with existing technologies," he said.

The next speaker, Hiroyuki Ito, President of Crypton Future Media, Inc., gave a presentation entitled "Think Global, Act Local" in which he reviewed the process by which "Hatsune Miku," the virtual singer created by the company, has created a "chain of creativity" triggered by its attractive characterization and generated a worldwide craze.President Ito said, "While traditional industries are top-down and those with 'money, corporate experience, and connections' have an advantage, the creative economy of the future will be bottom-up and 'empathy' and 'individuals' will be important, and creativity and the ability to get involved will determine the advantage.

The packed room was filled with participants who listened to the lecture and asked questions.The reception after the lecture was also well attended, with many participants enthusiastically discussing the future of the IT industry in Sapporo.

A video of some of the lectures can be viewed here.
http://www.ustream.tv/channel/kcg-edu 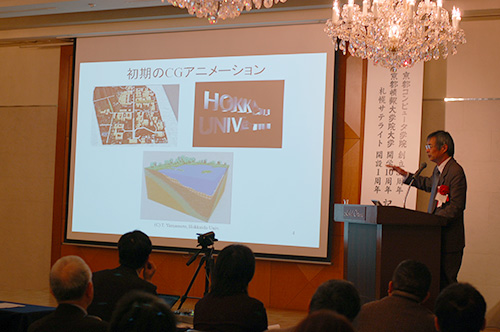 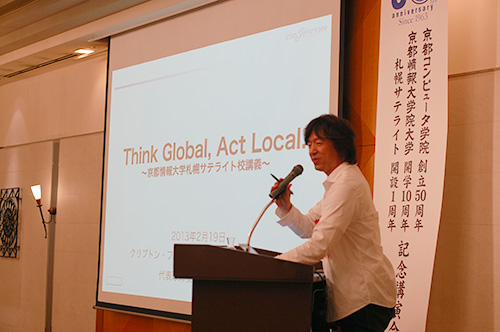