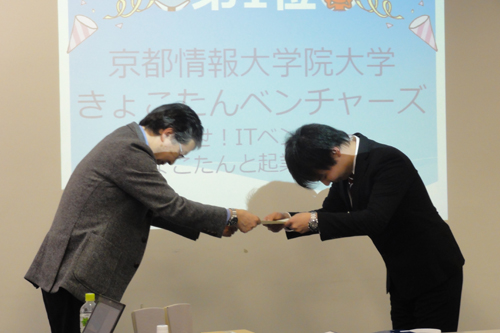 The Kyoto College of Graduate Studies for Informatics (KCGI) student team “Kyokotan Ventures”, who participated in the “JMOOC University Student Team Championship” event that allows students to take online courses created by a college student team for a limited time only It was ranked first and was awarded by the JMOOC University Student Team Championship Executive Committee on 19 February.

The eight members of Kyokotan Ventures are Takahiro Ueno, Satoshi Kojima, Shu Numata, Takashi Araga, Norihua Zhang, He Huanxi, and Li Kobayashi of KCGI, and Eihiro Suzuki of Kyoto Computer Gakuin College (KCG).Ueno and Kojima attended the award ceremony on behalf of the students and received a certificate of commendation, prize money, and commemorative Tyrol Chocolates with an image of their lecture on the wrapping paper, all with big smiles on their faces.

This "JMOOC University Student Team Championship" was held by JMOOC, which usually offers courses from universities and companies, under the theme of "interesting and informative online courses by students.Kyokotan Ventures" is a group of young people who are aiming for the "Aim!"IT venture-thinking about entrepreneurship" and "Kokokotan", the official character of the group, focusing on lectures by KCG group (The Kyoto College of Graduate Studies for Informatics, Kyoto Computer Gakuin) As a guide, we created a course to learn the knowledge and skills necessary to start a business in the IT industry.Each participating team's course was evaluated in four categories: "number of logins," "completion rate," "satisfaction," and "discussion." Kyokotan Ventures topped the list in "number of logins" and "satisfaction," winning first place for overall points. 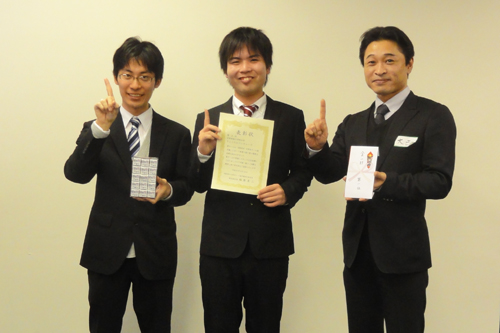