*This was featured in a Korean newspaper (Halla Ilbo). 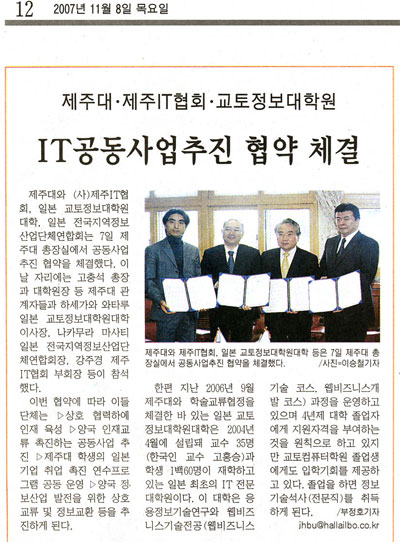 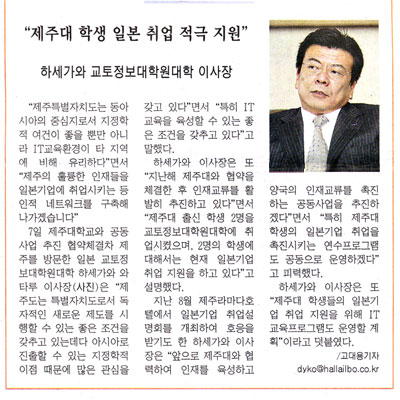 Jeju Special Self-Governing Province not only has good geographical conditions as the center of East Asia, but also has an advantage in the IT education environment compared to other regions" "We will build a human network by having talented people from Jeju work for Japanese companies.

（On November 7, Chancellor Wataru Hasegawa (photo) of the Kyoto University of Information Science and Technology (Japan) visited Jeju to sign an agreement with Jeju National University to promote joint projects.We have a good set of conditions to promote IT education in particular," he said.

Chancellor Hasegawa also commented, "After concluding an agreement with Jeju National University last year, we have been actively promoting personnel exchange.He explained, "We have placed two graduates from Cheju University in employment at Kyoto Institute of Information Science, and are currently supporting two more students in finding employment at Japanese companies.

After receiving a positive response at a job fair for Japanese companies held at the Jeju Ramada Hotel last August, Chancellor Hasegawa said, "We will cooperate with Jeju National University to foster human resources and promote joint projects to promote human exchange between the two countries.In particular, we will jointly operate a training program to support Jeju University students in finding employment in Japanese companies," he said.The company also plans to operate an IT education program to help Jeju university students find employment in Japanese companies," he added.