Concert to celebrate the release of the 50th anniversary CD and the start of ".kyoto" operation

On October 10, 2014, a concert was held at the Kyoto Station Satellite Hall of the Kyoto Institute of Information Science to commemorate the release of the KCG Group's 50th anniversary CD album "MUΣA" and the launch of the top-level geographical name domain ".kyoto" (dot kyoto), for which the university serves as the registry operator.The concert was planned and directed by students and realized the creation of performing arts by IT.Many people from outside the university visited the event and seemed to enjoy Ms. Nizza's clear singing voice and the students' young sensibility in the performance.At this concert, the KCG Group celebrated its 50th anniversary once again and pledged to make even greater strides into the next era.

They performed 12 songs including "Se Thelo," "Cauda Pavonis," and "Jupiter," which opened the 50th anniversary of Kyoto Computer Gakuin (KCG) and the 10th anniversary of The Kyoto College of Graduate Studies for Informatics (KCGI) held at Kyoto International Conference Hall on June 1, 2013.Drums by George Nishigomi, keyboards by Jun Abe, bass by Teppei Kawasaki, erhu and chorus by Kanae Nozawa.During the course of the event, an image video created by KCG students was projected on the screen, adding to the harmony.The students met with Nizza and selected two songs from "MUΣA," translated the lyrics, discussed the images, and created the story.During the concert, a representative of the students presented episodes explaining the production process. In the finale, a chorus group of students joined, and the concert reached its climax. Visitors listened to Nizza's songs and applauded loudly.

After the concert, a party was held in the 6th floor lounge of the Kyoto Ekimae Campus, where KCG Group President Wataru Hasegawa greeted the guests and received congratulatory speeches from Prof. Norihiko Mino, Director of Kyoto University's Information Environment Organization and Professor of the Academic Information Media Center, and Mr. Takahiro Moriki, Director of the Manufacturing Promotion Division of the Kyoto Prefecture Commerce, Industry, Labor and Tourism Department.Afterward, we enjoyed chatting with Mr. Nizza and the performers.At the concert, Nizza said, "This concert was created together with students, faculty and staff.I myself had a very happy time," he said.

In addition to being a vocalist, Ms. Nizza is also active as a dubbing artist for commercials and video game characters.He teaches a class in the IT Voice Actor Course, newly established in 2014 in the Information Processing Department of KCG's C Studies (Computer Science).He teaches vocalization and other techniques while introducing the use of IT in his own activities.In addition to students in this course, students from other departments and KCGI are also taking the course to deepen their understanding of digital sound processing through songs and animation postrecording.

One of the objectives of the concert is to further enhance the ".kyoto" brand as a domain name that maintains a high degree of trustworthiness for those associated with Kyoto, with an emphasis on the public interest and public nature of the domain name.In cooperation with the Kyoto Prefectural Government and other organizations, we will strive to contribute to the revitalization of Kyoto Prefecture's industries and to the local community by making the system available to many companies, schools, and individuals in the prefecture, as well as public institutions.

A singer-songwriter born in Montreal, Canada, who has fascinated audiences all over the world with his multilingual skills. She is one of the three main vocalists of "Cirque du Soleil" an entertainment group that performs circuses and musicals in various countries. Among them, she was the only one whose lyrics and music were chosen for the Cirque du Soleil show, and she can be said to be the de facto top singer in the group.She does not belong to any record company label, and performs songs and songwriting and also does graphic design, promotion, and sales. Professor at Kyoto Institute of Information Science and Technology and Kyoto Computer Gakuin University since 2013. 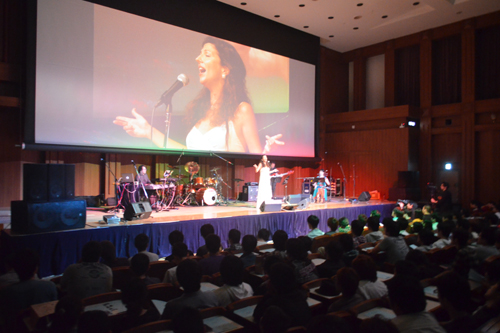 Nitza Melas sings enthusiastically at a concert commemorating the release of the KCG Group's 50th anniversary CD album "MUΣA" and the start of .kyoto operations.
END_OF_DOCUMENT_TOKEN_TO_BE_REPLACED