On Friday, May 10, “Supercomputer“ Kyo ”10 Petaflops” by Yuji Tomonaga, General Manager of Next-Generation Technical Computing Development Division, Fujitsu Limited, will be the sixth installment of the 50th anniversary lecture of the KCG Group. Was held at the The Kyoto College of Graduate Studies for Informatics Kyoto Station Satellite Hall.

Mr. Oinaga talked about the technical aspects of the K computer, which was jointly developed by RIKEN and Fujitsu and achieved the world's highest computing performance in 2011.

In his lecture, after reviewing the history of supercomputers, he introduced the history of the development of the supercomputer "K computer," which achieved the world's first 10 petaflops in November 2011.Mr. Oinaga emphasized that the "K computer" "has not had a smooth road to development, overcoming many challenges.He introduced Fujitsu's joint development with experts in the "Heart Simulator," "Magnetic Field Simulator," and "Tsunami Simulator" divisions.

He said that as of 2012, the K computer ranked third in the world in terms of computing performance, and that in the future, the company will continue to focus on low power consumption while pursuing the latest technology in semiconductors, cutting-edge memory, and optical technology to achieve the high goal of exascale performance (the ability to achieve performance exceeding 10 to the 18th power (100 kbit/s) operations per second).

He also touched on the fact that during the project screening by the Democratic Party of Japan (DPJ), it was pointed out that the development of a supercomputer "should not be the second best in the world (in the world)?Second place is the result of aiming for the top but losing.He emphasized that "engineers must always be in pursuit of being the best.

*"K computer" is a registered trademark of RIKEN.
The supercomputer "K computer" was jointly developed by RIKEN and Fujitsu. 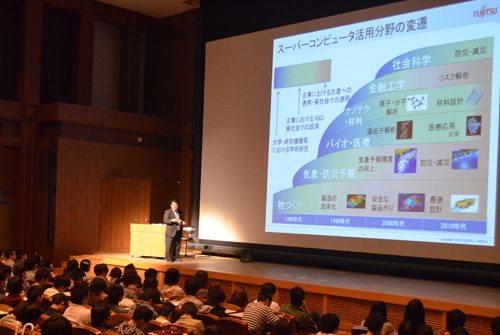 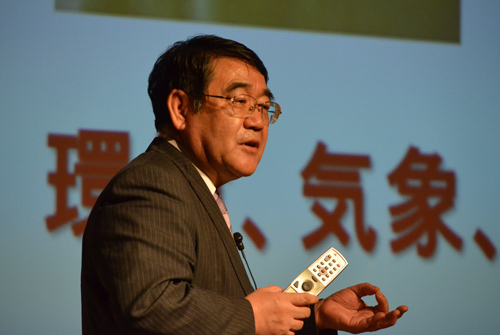