ANIA Joins to Establish "Japan Federation of IT Organizations," Announced at Discussion Meeting 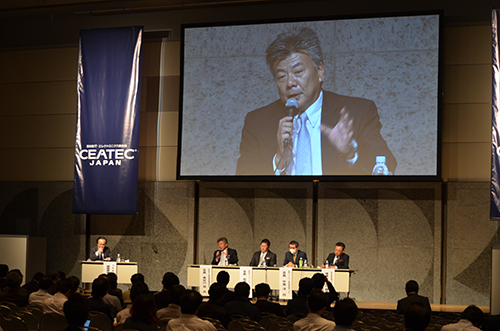 The heads of the four organizations announce the establishment of the "Japan Federation of IT Organizations."ANIA President Wataru Hasegawa, second from left, at Makuhari Messe in Chiba City on October 9, 2015.

A general incorporated association chaired by the President of Watanabe Hasegawa, President of The Kyoto College of Graduate Studies for Informatics (KCGI) and Kyoto Computer Gakuin (KCG) to create an organization that actively makes proposals to the government to build the world's highest level of IT society Four IT-related organizations such as the Association of Regional Information Industry Associations (ANIA) gathered to establish the “Japan IT Association Federation” and was held at Makuhari Messe in Chiba City on October 9, 2015. CEATEC JAPAN 2015's panel discussion “Think about tomorrow's IT policy and the software industry: the role and common issues of IT-related organizations”, chairman Hasegawa and other top executives announced their thoughts for the new organization I did it.

The purpose of the association is "to contribute to the sound development of the IT industry in Japan as an association of IT-related organizations, and to contribute to the improvement of the Japanese economy, society, and people's lives by actively making proposals and other actions while achieving two-way communication with the government in order to build a world-class IT society.The national policies related to IT are scattered among the Ministry of Economy, Trade and Industry, the Ministry of Internal Affairs and Communications, the Ministry of Education, Culture, Sports, Science and Technology, the Ministry of Land, Infrastructure, Transport and Tourism, etc., and there are currently nearly 200 IT-related organizations under the umbrella of each ministry.By inviting these IT organizations to participate and organizing a strong group, we aim to strengthen our recommendations to the government.The plan is to hold an inaugural meeting by the end of the fiscal year.

During the panel discussion, Mr. Hasegawa mentioned the shortage of human resources in the IT field, which is estimated to be 500,000 people, and cyber defense, etc. "The government and others have pointed out the shortage of human resources in the IT field many times in the past, but there is no evidence that policies to solve this problem have borne fruit.In addition, Japan's awareness of cyber attacks is low, and despite the urgent need to develop human resources with skills related to cyber defense, the current educational system is completely weak in its response.We need to implement human resource development measures by industry associations, and the new association will design a curriculum on the corporate hiring scale and create an industry-led system to develop human resources through e-learning," he emphasized.He added, "One of the goals of the new organization is to improve the distribution of information, including to companies in local cities.We should also appeal to the software industry by creating content industries such as animation and movies in order to attract people to the industry," he said. 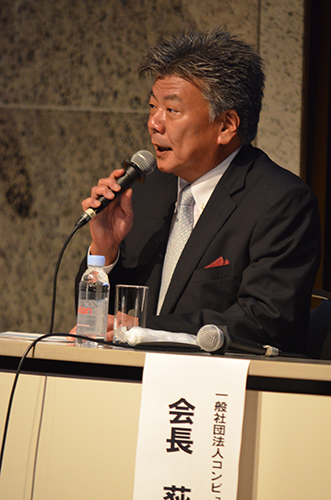 Mr. Hasegawa emphasized the need for an industry-led education system to develop IT human resources.
END_OF_DOCUMENT_TOKEN_TO_BE_REPLACED