The founding principles were reiterated in the "Kando Memorial" lecture.The booths were also lively. 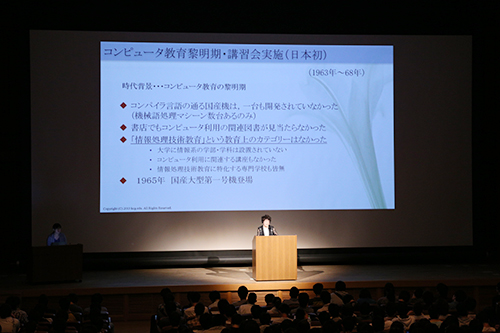 July 2 is the anniversary of the death of Shigeo Hasegawa, the founder and first president of Kyoto Computer Gakuin (KCG).At KCG Kyoto Ekimae School, a commemorative lecture was given by Yasuko Hasegawa, another founder and dean of KCG, who spoke to the students about the "Founding Principles" that she and Dr. Shigeo had set forth.

In his commemorative lecture, the Dean reiterated the founding philosophy of "cultivating information processing engineers who will pioneer the times and lead the future," and introduced the path that the two founders have taken and worked on for the past 50 years since their foundation to realize this philosophy.The school pursues "education that integrates theory and technology" in a way that sets it apart from national, public, and private universities and vocational technical training schools throughout Japan that uniformly advocate academism.Looking back on the introduction of a series of top-of-the-line computer facilities, such as the TOSBAC-3400, and the opening of these facilities to students in spite of the barracks building, he said, "We have considered giving students dreams, stimulation, a sense of problems, and a sense of the times, while at the same time storing within each student the latent energy to create the power of tomorrow.Creativity is not inborn, but can be developed through education," he emphasized.

He also talked about how the founder's educational reform spirit and identity laid the foundation for the opening of The Kyoto College of Graduate Studies for Informatics (KCGI), and how the university recognizes computers as part of its culture and is making efforts to realize a computer museum.Our university is the crystallization of our founder's outlook on life, worldview, and attitude toward life.I hope that you will absorb the various factors of self-formation from this program and blossom in self-realization after graduation," he concluded.

On the day of the event, the clubs and circles held a lively event with booths selling yakisoba noodles, rice burgers, shaved ice, and other food items.
In addition, " KCG Summer Festa 2013 " (supported by the Kyoto City Board of Education), planned in conjunction with Kando's memorial service, will open soon.The festival will continue until early August with a variety of events, including workshops on astronomy, trains, and electronics, lectures, live talks, IT workshops for elementary and junior high school students and the general public, and chorus performances.Please take this opportunity to visit KCG.

Kando" means "a quiet space to meditate away from the world," and is the pseudonym of Dr. Shigeo Hasegawa.He passed away on July 2, 1986, at the age of 56.KCG has designated July 2 as "Kando Memorial Day," a day to remember the legacy of Dr. Shigeo Hasegawa and to recall the spirit and passion he embraced.
Students and faculty members visited the grave of Dr. Shigeo Hasegawa at Chionji Temple (Tanakamonzen-cho, Sakyo-ku, Kyoto City), the head temple of the Jodo sect, and quietly laid hands on him in remembrance of the days of his life.