We are pleased to report that we gave a lecture at Fujian Normal University in China, which is affiliated with Kyoto University of Information Science and Technology. 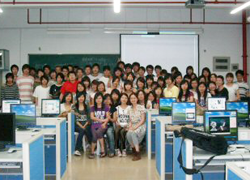 From March 20 to June 17, 2009, Associate Professor Keiji Emi gave the following lectures at Fujian Normal University.
One is the "FLASH Practical Course" of the Department of Multimedia at the Depositary of Science for Foreign Students in Japan.In the first two weeks of the course, Dr. Souki Fujino joined the class as an educational assistant and gave a lecture on business strategies on "what kind of animation should be produced" based on the demand for animation in Japan, and the students discussed the direction of animation production.After that, Associate Professor Emi gave a class in which groups of four or five students created animations with hands-on FLASH practice.

The second is "LINUX Systems Application and Development" in the Department of Networking, Depositary School of Foreign Language and Culture.In this course, students learned the principles of LINUX and networking, how to use a web server through a combination of lectures and hands-on practice, and finally built a website as a group.
Since all students in both departments are planning to study abroad at our graduate school in the near future, the lectures and practical training were conducted from the perspective of web business.