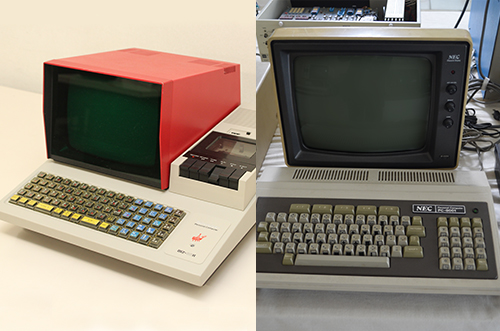 Following the National Museum of Nature and Science's recent selection of Sharp's MZ-80K and NEC's PC-8001 as "Heritage of Future Technology" for 2015, the KCG Museum, which preserves both actual working models, was featured in NHK's national and Kyoto local news on September 1, 2015.People across the country were made aware of the KCG Group's commitment to carefully preserving the valuable computers and other equipment from the past used in education, training, and research over the more than 50 years since the group's founding.

The museum has established a system of "Heritage of Future Technology (Important Historical Materials on Science and Technology)" to pass on to future generations the achievements of science and technology that have significantly changed or influenced people's lives.This year's 25 selections included both models of the domestically produced 8-bit personal computers that triggered the microcomputer boom of the 1980s and Hitachi's "Basic Master-MB-6890," as well as Sony's "AIBO," a dog-shaped robot equipped with artificial intelligence, Pioneer's "PR-7820," the world's first professional laser disc player, and Sankyo Shoten's (now Daiichi Sankyo) "Takadia Astase" stomachic digestive medicine.

To report the news, NHK visited the KCG Museum at Kyoto Computer Gakuin Kyoto Ekimae School to cover the actual MZ-80K and other machines in operation.According to NHK, no other place had preserved these models with such care.Eiji Kubota, head of the engineering department and vice principal of KCG Rakuhoku School, who was present at the interview, said in an interview, "Compared to today's computers, the start-up time is incomparably slower, but the waiting time was exciting.There is no doubt that these models were the start of a major boom in personal computers that changed the times, and the start of Japan's IT development," he said.

In 2009, the KCG Museum was recognized by the Information Processing Society of Japan as the nation's first "Distributed Computer Museum" because it "preserves many of the most valuable equipment in Japan.The MZ-80K was also recognized as a "Heritage of Information Technology" by the Society in 2013.The KCG Museum, which preserves many valuable computers, including six "Information Technology Heritage" models, is open to the public and can be visited.