The first distance lecture connecting KCGI and National Jeju National University in Jeju, Korea via the Internet was realized on Thursday, November 6.The first lecture, "Internet Business Strategy and Marketing," was given by Professor Noboru Koh, originating from Room 205 at KCGI Hyakumanben Campus.Professor Koh is a native of Korea and has served as Director of the Information Strategy Department of the Strategic Planning Office of Samsung Electronics Co.

From the side of National Jeju National University, students studying Japanese language and culture attended the course.At the beginning of the lecture, we greeted each other with "Annyong Haseo," congratulated each other on the realization of the remote lecture, and confirmed that we would continue to exchange ideas in terms of research in the future.The lecture was given in Japanese.

In September this year, the two universities signed an agreement on the establishment of a Japan-Korea Cyber Campus, which will allow students from both countries to exchange courses on the Internet. On Tuesday, November 18, a distance lecture from Jeju National University is scheduled.Professor Gyung Leen Park will be in charge. 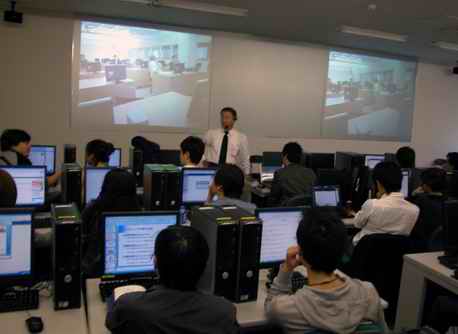