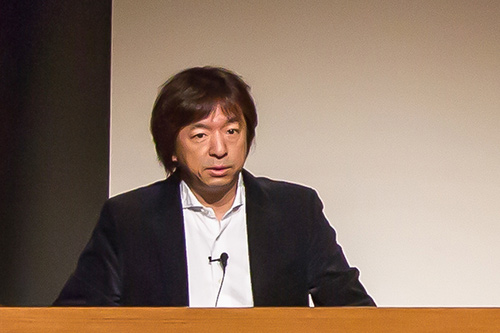 On November 18, 2016, Professor Hiroyuki Ito of Kyoto College of The Kyoto College of Graduate Studies for Informatics (KCGI), who is the president of Crypton Future Media, Inc. (headquartered in Sapporo, Japan; founded in 1995) and the creator of VOCALOID "Hatsune Miku," gave a special lecture in Kyoto at the Kyoto Station Satellite Main Hall of Kyoto College of The Kyoto College of Graduate Studies for Informatics.In this lecture titled "Hatsune Miku: Past, Present, and Future," Professor Ito spoke passionately to KCGI and KCG students about the development of Hatsune Miku, the "chain of creation" in which creators around the world create new art from Hatsune Miku, and the "MIKU EXPO" 3DCG concert of Hatsune Miku held worldwide in 2016.In order to accommodate the increasing number of international students at KCGI each year, an attempt was made for the first time to provide simultaneous interpretation into English by KCGI faculty members through a wireless receiver.

Miku Hatsune" is a virtual idol born in 2007, standing 158 cm tall, weighing 42 kg and 16 years old.With 100,000 songs, 1 million Japanese SNS users, 2.5 million Facebook users in English, and 800,000 Weibo users in Chinese, the company has a worldwide fan base, and its annual 3DCG concerts held around the world are attended by many fans.Regarding the development and success of the world-famous idol "Hatsune Miku," Professor Ito said that the success was achieved by combining two existing technologies, speech synthesis and computer music, to create a singing voice synthesis technology, to which he added the element of a character.He also pointed out that the success of "Hatsune Miku" was due in part to the fact that in 2006, the year before its release, "Nico Nico Douga" was launched and the posting of videos took root in the general public.

Professor Ito explained that the addition of this character stimulated creators' "desire to create" and triggered a "chain of creation" that spawned a chain of secondary and tertiary art from "Hatsune Miku," and emphasized that the fact that the copyright issue was cleared was a particular boost to this.Therefore, we set up a content posting site called "piapro" (peer pro), where users can post "fan art" (secondary works) and other users can freely use them for their own creations.The only rules to follow were to express gratitude to the creator, not to use it in advertisements, and not to create something that would lower the value of "Hatsune Miku." He said that the opening of these rights led to his active creation.Crypton Future Media, Inc. has been actively involved in the commercialization of works created in this way, and has distributed more than 8,000 songs around the world. 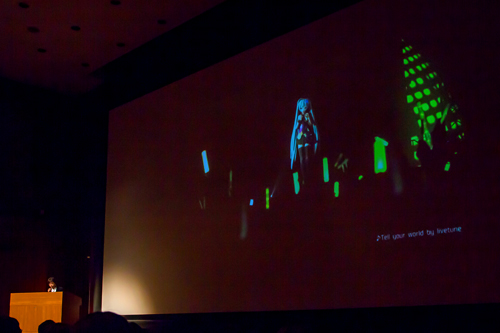 Hatsune Miku concerts in 2016 have already been held in five cities in Japan (Fukuoka, Osaka, Nagoya, Sapporo, and Tokyo) and 10 cities in North America (including Mexico City), all of which have been a great success.In particular, the North American tour was even more exciting, as the U.S. TV station NBC featured it on its website. At a concert in Chicago in June, fans who could not attend the venue gathered at a bookstore in the city to draw pictures of Miku.Other collaborations with singers Namie Amuro and Bump of Chicken, as well as composer Isao Tomita, were also introduced, showing the diversity and breadth of "Hatsune Miku's" activities.

Finally, he touched on the "SNOW MIKU 2016" (Snow Miku) event held in Sapporo this past February, introducing a wide range of activities closely related to his hometown of Hokkaido, including the public call for "Hatsune Miku" costumes with a winter sports theme, the presentation of a snowboard-riding "Hatsune Miku" design, the creation of a "Hatsune Miku" snow statue, wrapping on Sapporo streetcars, and a booth in the New Chitose Airport dedicated to "Hatsune Miku".For the 2017 SNOW MIKU, they have already decided on a design for a costume with the theme of "starry skies in winter" from the public.Professor Ito said, "Hatsune Miku cannot do anything on its own without creators, so I want creators to create more and more.It is our job to create an environment that facilitates everyone's participation," he said, expressing high expectations for the ambitious creative activities of young people.

Mr. Ito became a professor at KCGI in April 2013.In recognition of his international activities and technological innovations, he was awarded the Medal with Blue Ribbon in 2013 and the FIT Funai Achievement Award in 2016.Professor Ito's activities and progressive initiatives provide a great vision for students studying IT (ICT) and contents at KCGI, and are also a great inspiration for KCG students who can audit classes at KCGI and KCG, especially those studying contents-related subjects such as art and design, digital games, computer science, and IT voice acting courses in the information processing department.