Prof. Yamagata of KCGI retired and gave a memorial lecture. 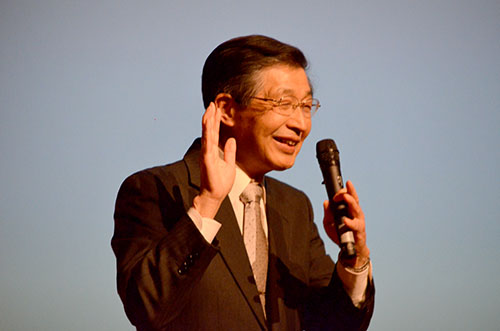 Prof. Keiichi Yamazaki, Professor of The Kyoto College of Graduate Studies for Informatics (KCGI), will retire in March 2016. On March 28th, he attended a commemorative lecture at the Kyoto Information University University Kyoto Hall.Dr. Yamagata became a professor at the same time KCGI opened in 2004, and taught courses such as "Advanced Computer Systems" and "Advanced Production Systems Engineering," as well as computer architecture and numerical analysis at KCG.

Prior to the lecture, Dr. Toshihide Ibaraki, President of KCGI, introduced Dr. Yamagata's background and said, "He is a mild and diligent teacher.The lectures and classes were very detailed, and we have much to learn from them.I am filled with gratitude for his dedication to the development of KCGI," he said.

The topic of Dr. Yamagata's final lecture at KCG was "Principles Underlying the Diversity of Digital Information.He explained the past flow of recording and transmitting information and the mechanism for expanding the capacity to send information based on the principles of Fourier (French mathematician and physicist) and Shannon (American electrical engineer and mathematician), and said, "When it is technically necessary to reduce the volume of information, let it be in line with the purpose of information people seek.If it is music, it should satisfy auditory perfection, and if it is an image, it should not lose its beauty.On the other hand, if the information is unacceptable, error correction should never be neglected, even if the amount of information increases slightly and the transmission speed slows down," he concluded.Finally, the students presented Dr. Yamagata with a bouquet of flowers as a token of their appreciation.

After graduating from the Faculty of Engineering at Kyoto University, Dr. Yamagata studied in the laboratory of Dr. Hiroshi Hagiwara (the first president of KCGI, deceased) as one of the first students.D. in Mathematical Engineering at Osaka University, and became a professor at the Faculty of Integrated Arts and Sciences, Hiroshima University (currently professor emeritus at Hiroshima University).He has been a professor at KCGI since April 2004 and has been teaching students.He has also served as the President of the Chugoku Branch of the Information Processing Society of Japan (IPSJ).

Thank you, Dr. Yamagata.I wish you well and look forward to your continued guidance of the KCG Group.

After the lecture, the students presented a bouquet of flowers in appreciation (all at the main hall of the satellite in front of Kyoto Station, Kyoto Institute of Information Science, March 28, 2016).
END_OF_DOCUMENT_TOKEN_TO_BE_REPLACED