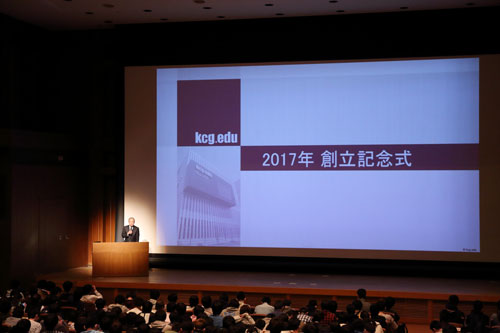 May 1, 2017 is KCG Group's 54th anniversary.On April 28, a commemorative ceremony was held at the main hall of the Kyoto Station Satellite of the Kyoto Institute of Information Science, where students and faculty members celebrated the anniversary, reaffirmed the mission to support the information society of the future, and pledged to make further progress.

At the ceremony, Professor Shigeru Eibo, Vice President of Kyoto College of The Kyoto College of Graduate Studies for Informatics (KCGI), began by explaining that "KCG has been making steady progress with a pioneering spirit since its founding.KCGI Visiting Professor Hiroto Chiba, Director of the KCG Archives, continued with a lecture titled "Tracing the History of Kyoto Computer Gakuin's Practice Equipment.

Visiting Professor Chiba, who supervised the KCG Computer Museum's book "A Natural History of Personal Computers," recently published by Kodansha, said, "The KCG Museum received the first certification as a distributed computer museum from the Information Processing Society of Japan in 2008, as one of the best facilities in Japan that displays and preserves a collection of valuable computer equipment.KCG students are lucky to be able to see the state-of-the-art equipment of the time, including the heritage of information processing technology, up close at any time," he prefaced.After explaining about KCG Museum and Heritage of Information Processing Technology and introducing the history of computers, the lecture started with mainframe "TOSBAC-3400" (certified as Heritage of Information Processing Technology in 2008, developed by Hiroshi Hagiwara, the first president of The Kyoto College of Graduate Studies for Informatics) and explained in detail about the practical equipment used in KCG Group for 54 years since its foundation, including off-computers and microcomputers.He concluded, "KCG still has many valuable computers that cannot be fully exhibited.We will make every effort to make the activities of the KCG Museum widely known to the public so that we can secure a larger exhibition space in the future," he stressed.Students and faculty listened attentively and seemed to reflect on the weight of 54 years of history.

The foundation of the KCG group is the "FORTRAN Research Group", which was established on May 1, 1963 by a group of graduates from the Department of Astrophysics, Graduate School of Astrophysics, Kyoto University.This was a workshop for academic researchers at the university for the use of the IBM 7090.It was the first information education institution in Japan, founded by Shigeo Hasegawa, the first president of the school, and Yasuko Hasegawa, the current president, with a great passion and pioneering spirit to discover the potential of computers and to train information processing engineers.

Since then, Kyoto Computer Gakuin has developed as Japan's first full-time school for the training of computer engineers, and more than 40,000 graduates have left the school over the past 54 years.In April 2004, “The Kyoto College of Graduate Studies for Informatics”, the first and only IT graduate school in Japan, was established and joined as a group school. All graduates and graduates are leading the IT industry in Japan and the world. Contributing to development.In 2013, Kyoto Automotive College, the oldest auto mechanic training school in Kyoto, joined the group.