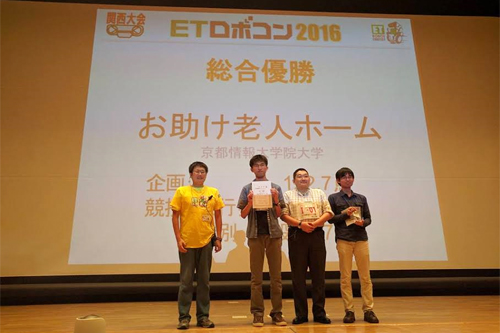 The 2016 ET Robocon Kansai Regional Competition was held on September 19 at Kyoto Computer Gakuin (KCG), and the team led by Yuuki Ohashi (leader) and Shu Numata, both students at The Kyoto College of Graduate Studies for Informatics (KCGI), and Shoichi Washida, a KCGI graduate, won the "Innovator Category".I was also honored to receive the METI Kinki Director-General's Award at the same time.KCGI teams will compete in the championship tournament in Yokohama on November 16.

The KCGI team, under the team name "Helpful Nursing Home," planned and developed "Eagle 113," a robot that patrols a nursing home at night.Eagle 113" is a robot that patrols the corridors along a designated route during the nighttime when manpower is scarce and adequate patrols are not possible, and notifies staff via smartphone when it finds a resident who has fallen.The idea and design of the device were highly evaluated, as it operates for approximately seven hours on a single charge and is easy to repair if broken by residents.In the "Innovator Division," contestants will compete in their ability to plan and develop products and services that solve their own problems.

The ET Robocon is a nationwide robot contest that has been held annually since 2002, with the aim of fostering world-leading engineers and providing opportunities for young to mid-level engineers to take on the challenges of modeling and planning and developing products and services.