Talking about Hatsune Miku 10 years after her birth!Lecture by Professor Ito KCGI, the creator of the program 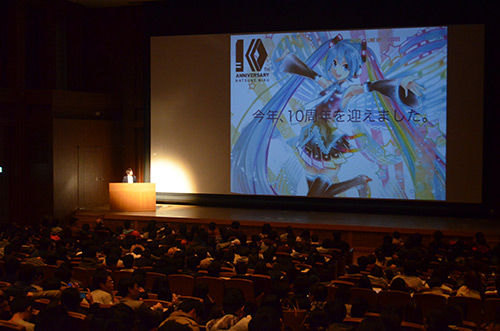 KCGI Professor Hiroyuki Ito talks about the history of Hatsune Miku at a special lecture titled "Why Hatsune Miku is supported worldwide" at the main hall of the satellite in front of Kyoto Station, Kyoto Institute of Information Science, December 8, 2017.

Professor Hiroyuki Ito, president of Crypton Future Media Inc. (HQ: Sapporo, founded in 1995), creator of the Vocaloid "Hatsune Miku," gave a special lecture, "Why Hatsune Miku is supported worldwide," on December 8, 2017, at the main hall of KCGI Kyoto Ekimae Satellite.Ten years have passed since the birth of "Hatsune Miku.Looking back on how creators of various genres have created works based on "Hatsune Miku" and how she has become loved around the world, Professor Ito introduced the "Magical Mirai" participatory event and the "MIKU EXPO" held in various cities around the world, using video clips.Professor Ito said, "Miku is loved by many people around the world.We will continue to maintain the ease of use of the system and strive to make it enjoyable and meaningful for everyone.KCG and KCGI students listened with great interest to the lecture by Professor Ito, a world leader in the content business.

Hatsune Miku" was born on August 31, 2007, standing 158 cm tall, weighing 42 kg, and 16 years old.With more than 100,000 songs, over 2 million videos posted on You Tube, and more than 2.5 million official Facebook users, the 3D concerts held around the world attract a large number of fans.

In his lecture, Professor Ito began by introducing the various businesses of Crypton Future Media, Inc. and then explained to the students how to create sounds and songs using software as an "introduction to digital sound.Of the sensory functions, hearing is the first to which humans respond.He stated that DTM (Desk Top Music = computer-based music production) requires equipment (audio, speakers, etc.), software (including effectors and other plug-ins), and sound sources (virtual instruments, etc.).He explained that virtual instrumentation has gradually evolved from hardware samplers to software samplers in the 2000s, and has expanded to include software that creates sounds for drums, piano, and wind instruments.So, we began to talk about the possibility of using software to create human voices, and Hatsune Miku was born.In addition to the singing synthesis technology, the integration of the characters has made the Vocaloid more relatable," he said.

In developing "Hatsune Miku," he emphasized how to open up the rights (related to copyrights), saying, "For copyrights, we created and announced a license and made it clear what could and could not be used freely with Hatsune Miku.In addition, we felt that it was burdensome for third parties to obtain permission from Krypton and the creators of derivative works each time they wanted to use them, so we launched a content submission site called "piapro" to allow third parties to freely use derivative works as long as they express their gratitude to the creators as a matter of etiquette and only for non-commercial use.We have tried to create a place where creators can actively create without feeling intimidated," he explained.

Hatsune Miku has expanded its expression from singing and voice to dancing, moving images, cosplay, and figurines.Commercialization has continued, and many collaborations have been realized, including fashion, opera, robots, racing teams, video games, Japanese drums, and popular TV animation characters.This year, the emblem was also used as the city emblem of Chiba City for a limited time on August 31, the birthday of "Hatsune Miku".

Professor Ito introduced that a Chinese version of Hatsune Miku was born and the first Shanghai concert was realized in September 2017.He revealed that the 2018 Magical Mirai will be held in Osaka in addition to the usual Makuhari Messe.After 10 years, "Hatsune Miku" will continue to be loved by many people around the world.

Mr. Ito became a professor at KCGI in April 2013.In recognition of his international activities and technological innovations, he was awarded the Medal with Blue Ribbon in the fall of 2013.KCGI and KCG have mutual class exchanges and have a system for auditing each other's classes.Not only students in the Contents Business Course at KCGI, but also students in the KCG Art and Design Department, Digital Game Department, Computer Science Department, Information Processing Department, IT Voice Actor Course, and other content-related courses will learn a lot from Professor Ito's efforts. 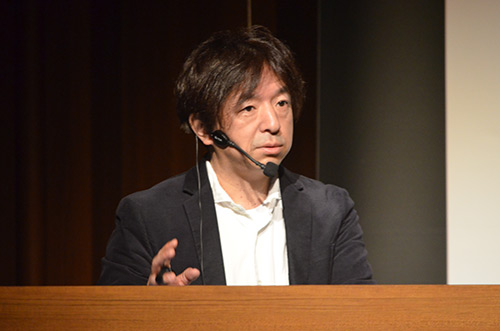 KCGI Professor Hiroyuki Ito talks about the history of Hatsune Miku at a special lecture titled "Why Hatsune Miku is supported worldwide" at the main hall of the satellite in front of Kyoto Station, Kyoto Institute of Information Science, December 8, 2017.
END_OF_DOCUMENT_TOKEN_TO_BE_REPLACED