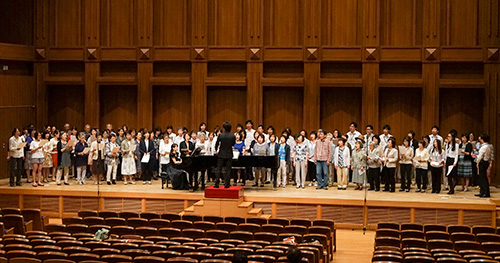 Let's Sing Together at KCG Summerfest 2015!Participants chorus "Kimi wa Hana Boku wa Kaze (You are the flower, I am the wind)" at the Kyoto Ekimae Satellite Concert Hall of Kyoto Institute of Information Science on July 4, 2015.

The first part of the program was "A Palette of Sound, Performed by Two Flute Players," featuring Riho Sano on flute and Tomomi Hirose on piano.Between songs, there was a commentary, and we enjoyed the lighthearted performance by the two young musicians.

The second part was "Let's Sing Together!"All participants sang "Kimi wa Hana wa Boku wa Kaze (You are the flower, I am the wind)" under the guidance of Mr. Yohei Yoshimura.They sang songs such as "History Never Gave Up," "Kimi yo, Be a Bridge to Connect the World," and "Ai yo, Transcend Words and Reach the World," while chewing on the "message of a world without strife" written in the songs.The song was written and composed by singer/songwriter Shuhei Umehara for KCG's chorus circle, U-Choir, and the video recorded in Japanese and Chinese has been uploaded to an Internet video site for worldwide distribution.At the beginning of the concert, U-Choir performed the Chinese version of the song, which was translated by an international student from TUFS, and received a big round of applause.