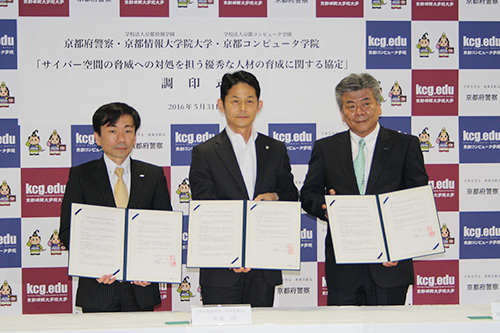 The Kyoto College of Graduate Studies for Informatics (KCGI) and Kyoto Computer Gakuin (KCG) have signed an agreement with Kyoto Prefectural Police to cultivate excellent human resources who can deal with cyberspace threats.The signing ceremony was held at KCG Kyoto Ekimae School on May 31 and was attended by Mr. Wataru Hasegawa, President of KCGI and Mr. Akira Hasegawa, President of KCG from KCG Group, and Mr. Hiroshi Ishimaru, Director of Kyoto City Police Department from Kyoto Prefectural Police.Two years ago, the prefectural police set up a system to train cyber special investigators in order to accurately deal with cyber crimes that misuse communications technology, and training for the second term began this spring. Based on this agreement, learning in basic classes on IT (ICT) at KCGI and KCG will be included in that training curriculum.The prefectural police say that by having trainees learn basic knowledge and skills in information technology (ICT) from an early stage, they will be able to effectively develop human resources to deal with threats in cyberspace.

It is also planned that KCGI and KCG students will observe and experience police work, and that police officers working on the front line will give classes at KCGI and KCG as instructors.The signing ceremony was covered by NHK, KBS, and Kyoto Shimbun, indicating the high level of public interest in the issue of cyberspace safety.