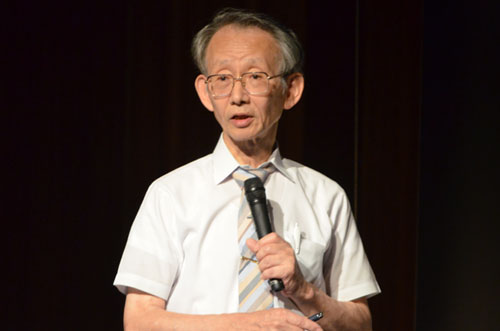 Prof. Kazushi Sakka of KCGI gives a lecture titled "National Simultaneous Tanabata Lecture Meeting at KCG - The Coming of the Great Comet will be the Topic of Astronomy in 2013.

On Friday, July 5, the ninth of the KCG Group's 50th anniversary commemorative lectures, " Nationwide Simultaneous Tanabata Lecture @ KCG - The astronomical topic of 2013 is the arrival of a great comet" by Professor Kazushi Sakka of The Kyoto College of Graduate Studies for Informatics (KCGI) (also the first part of KCG Summer Festa 2013 event astronomical workshop) was held at the main hall of Kyoto Station satellite of the Kyoto Institute of Information Science.Professor Sakka explained about the great meteorite that fell in Russia in February this year and Comet ISON, which comes in early winter, and talked to the public and students about the fascination of the faraway universe.In the evening, there was a second part of an astronomy workshop by students of the KCG Astronomy Club.

Professor Sakka began by referring to the great meteorite fall in Russia. "The meteorite was about 17 meters in size," he said, "but the city was enveloped in a bright white flash, and the subsequent shock wave caused panic in the area.In Russia, in 1908, a meteorite of about 50 meters fell in Siberia, an uninhabited area at 60 degrees north latitude, east of the current meteorite," he explained.If the time had been shifted and it had fallen on a major European city at 60 degrees north latitude, World War I might not have happened because we would have had to deal with it," he said.The meteorite that fell on the Yucatan Peninsula in Mexico 65 million years ago, which caused a cold snap that killed the dinosaurs, was 10 to 15 kilometers in diameter, had a magnitude of 11 or more, and caused a 300-meter tsunami.

He added, "The year 2012 was called the Golden Year of Astronomy, and the annular solar eclipse in particular was at the center of the conversation.The most important topic this year will be the arrival of comets," he said. "Comet ISON will arrive in late November or early December with a long tail and a brightness of 11th magnitude, equivalent to the brightness of a full moon.Let us hope that we will be able to see its majestic figure in the eastern sky before sunrise in Japan as well," he said.The comets observed so far in the world and Japan were introduced.

In the second part of the workshop, the KCG Astronomy Club explained the legend of Tanabata, then used the astronomical simulation software "Stellarium" to observe the stars that can be seen in Kyoto at this time of the year, and had participants imagine the stars shining on their computers.

The "National Simultaneous Tanabata Lecture Series" is an event organized by the Astronomical Society of Japan to hold simultaneous lectures on astronomy and space throughout Japan on July 7 and August 13, both of which are traditional Tanabata days.More than 100 events will be held this year. 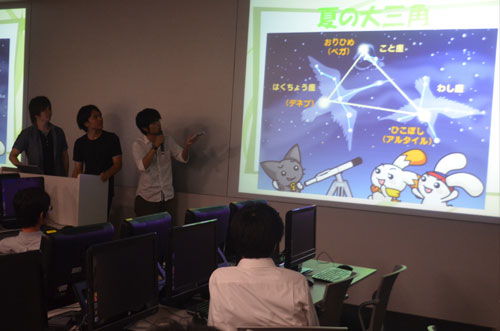 In the workshop, members of the KCG Astronomy Club explained about the Tanabata legend.