The 2012 The Kyoto College of Graduate Studies for Informatics (KCGI) degree award ceremony and the Kyoto Computer Gakuin (KCG) graduation ceremony were held on March 20, 2013 at the Kyoto University of Information Sciences Kyoto Ekimae Satellite Grand Hall.On this day, our 50th anniversary of the founding of the university was celebrated, and our graduates left the university.

Following the ceremony, Wataru Hasegawa, KCGI and KCG General Director, delivered the ceremonial address.Citing recent attempts by the KCG Group, such as the opening of the Sapporo and Tokyo satellites and the launch of the .kyoto domain name, he said, "As we work globally in the future, it is necessary to have our own strengths.I want you to find out what kind of person you are and make it your selling point.We hope that you will remember our university and become part of a network where alumni can help each other, strengthen bonds, and collaborate in their work," he said.

KCGI President Toshihide Ibaraki touched on the progress and changes of ICT (Information and Communication Technology) and the negative aspects it causes, saying, "It is the role of all graduates to think about how to lead ICT.As you work within the changing landscape of ICT, you can influence change in the world.I hope that you will make use of the knowledge you have acquired at this university and strive to advance the ICT society in the right direction," he said in his farewell address.

In his graduation address, the representative of the graduating class, Mr. Toru Mizutani, a graduate of KCGI's Department of Applied Information Technology majoring in Web Business Technology, reflected on his student life, including his experiences during his practical training at Tianjin University of Technology and Fujian Normal University in China, with which KCGI has an affiliation, and said, "I aim to become a specialist in various fields by making use of my experiences.I will cherish my connections with teachers and alumni, reaffirm the role that information technology should play in society, and devote myself to becoming a person who can contribute to society," he said.

After the graduation ceremony, a celebration party was held at the Kyoto Tokyu Hotel, where faculty members, graduates, and alumni enjoyed the aftermath of graduation by chatting with each other, watching a video of their memories, and playing a raffle. 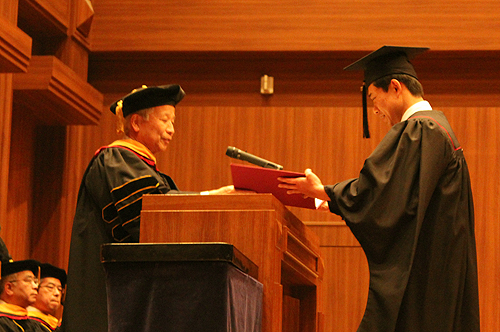 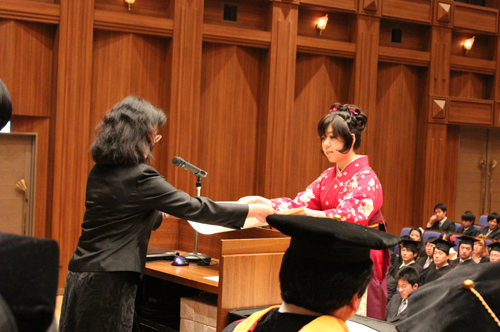 Each KCG graduate received a diploma from the principal. 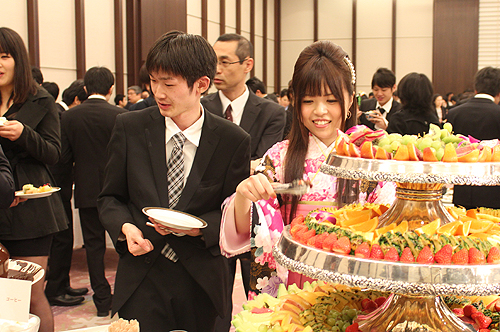 At the celebration party, students enjoyed the afterglow of graduation with faculty and staff.
END_OF_DOCUMENT_TOKEN_TO_BE_REPLACED